With news of a 'New iPad' I delayed my purchase of a bigger tablet to supplant/supplement my 7" one reviewed earlier. However, when the new iPad was launched and I found Argos selling iPad 2s with a year's warranty for just £279, it was no contest for me, no matter how good the New iPad's screen is.

Being very familiar with Android devices, I'll admit I haven't fully embraced the 'miracle' that is Apple.

Personally, it bugs the hell out of me that I can't access the iPad 2's file system or simply drag and drop files onto it. It's also overly complicated to copy files other than Apple's preferred formats on to it even if you use the awful iTunes interface.

Apple popularised (not invented) the GUI Drag 'n' Drop interface, so why they insist on a UI from the early 90s to get media to and from their tablets is totally baffling to me. The fact the software is essentially awful and controlling in most respects just adds insult to injury and for a while I seriously felt I'd made the wrong decision not to buy a Samsung Galaxy Tab 10.1 (and I still feel that might have been a better choice for me, if I'm honest).

That said, the iPad 2 is a nice piece of hardware.

Mine's a basic Wi-Fi only, 16GB model in black.

The two main reasons to get a bigger tablet were for a bigger screen (the Apple's is a non-widescreen 9.7") and better battery life than my Android tablet.

The iPad's much heavier than the M009S and feels an altogether better quality product (as its more than 4 times greater price would demand), although all that weight means the iPad isn't the one handed read in bed (make your own jokes if you wish) that the mostly plastic M009S is. If you want something compact and easy to carry, the iPad's not really any better than some laptops or most netbooks.

Even the iPad 2's screen is bright and clear, the difference with the new iPad's not easy to detect unless you see them side by side and then, not that easy unless you zoom a very high res photo. For most people the iPad 2 will be good enough, although technology moves on and in a few years time, I'm sure even the new iPad's resolution will seem paltry.

There's no way to expand the memory on an iPad (unlike the cheapy M009S!), but 16GB is probably ok unless you go mental with apps or want to store lots of movies or music on it in which case you might want to spring for a bigger capacity one.

So, what's better? Well side by side, the performance of the iPad blew away the M009S. Starting up any app is quick (even games) on the iPad and many are instantaneous, whilst there was a definite delay whilst they loaded on the M009S, but then the spec of the processor explains that.

It's great for reading e-magazines (I have a Zinio account), displaying and zooming in a much better way than the smaller screen did and I've got quite a few PDF based publications too, which never seemed to work well on the memory constrained M009S, but which are enjoyable to consume on the iPad.

Games are good - I have Real Racing 2HD (a car racing game, not dissimilar to Gran Turismo) and the steering input is extremely realistic feeling. The graphics will probably disappoint if you're used to a PC or XBOX 360/PS3 console, but they'll no doubt be better on the new version and are quite acceptable for the casual gamer (at least).

The much vaunted "There's an app for that" boast for the iPad (claiming competitors didn't have the selection) is probably less true than it was. I've got a great dive planner app on Android (just on my phone now) that I can't find a match for on the iPad and I've yet to find any awesome apps that don't have a good equivalent on Android. That said, there are plenty on the iPad so its honours even here.

I have a cheap (under a tenner) aftermarket "Camera Connection kit" for it which is great in that it allows the RAW format images from my Pentax DSLR to be uploaded automatically onto the iPad and edited using any of the free or low-cost image editing apps available. This seems a great boon over the cheap Android tablet I had and I look forward to making the most of this capability on holidays.

The sound quality is ok for the spoken word, but a bit thin for music (for my taste), although as it comes with a standard (remarkably for Apple!) 3.5mm audio jack, it's easy enough to add external speakers (or you could shell out for an iDock if you buy into the all things Apple credo).

One interesting insight was that my wife picked it up one evening. She's not comfortable with computer technology, finding it hard to attach pictures to emails, but she instantly seemed at ease with the iPad, navigating intuitively around the screens and apps. I guess the iPad is a naturual interface for the computer illiterate, but many of us are now literate enough to find it counter intuitive and have to unlearn some of our expectations. I might even buy her one as she seemed to really enjoy the experience.

So, overall the iPad's a nice bit of kit (I've sold my old, never used, PSP and the M009S since I got it) and may well be the 'standard' by which other tablets are measured (moreso with the hi-res screen), but it's not significantly ahead of Android in any way I can tell and lags in a few areas.

I'm happy with my purchase, but there's still a nagging feeling that I, personally, would have been even happier with the Samsung... 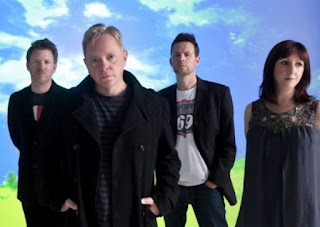 I'll have to come clean, I've been a fan of New Order since their first album, but somehow I'd never got to see them live.

I also thought I never would after the split with Bassman, Peter Hook, but then they did some gigs for a friend before Christmas and, again, hesitation meant I missed my chance.

When it was announced they were doing a short tour, I decided I wouldn't miss my chance again and I had a ticket for Brixton Academy on 2nd May 2012.

Brixton Academy isn't in the smartest part of London, but it's quite close to Waterloo, so it was easy to get to (a short walk from Northern Line station, Stockwell) and I arrived just as the doors opened at 7, whisking into the 'priority' queue thanks to my O2 network phone.

It's a pretty tatty looking place outside and not exactly luxurious inside. The ground floor, where I was, was at least double (maybe 3 times) as big as Shepherd's Bush O2 Arena, but it's not on the scale of the Wembley Arena. There's some baroque interior, but in the dark it was pretty hard to see much of it.

The cloakroom was two flights of stairs up, too, which proved a bit of a challenge when it came time to leave.

After about an hour of 'banging tunes' from a DJ (not bad actually) and a bland pint of Carlsberg, the support act came on.

Fellow (to New Order) Mancunian Jake Evans appeared with a second guitarist and a drummer. He was pretty uncharismatic, I felt, but he was OK and I felt the muted polite applause he got didn't really reward his performance. Sure it's a thankless task being a support act (The sound for his set was awful!) and no-one booed him off, but his set got better as he went along and deserved a warmer reception.

The DJ returned for what seemed an age - It was getting to the point, in my mind, that New Order had passed from building anticipation to keeping us waiting, but to the strains of Elegia they appeared out of the dark.

I'm one of the people who think there's good on virtually all of New Order's albums so I was happy to hear them break into Crystal as their full tempo opener. Seemed to me that most other people around me (near the front, but not quite in the maelstrom of the 'mosh pit' that developed right in front of the stage - I'd not experienced that sort of chaos since I was a 17 year old punk hanger-on!) were happy with the choice as an opener.

I've read a lot of reviewers panning the sound and claiming you couldn't tell which track was being performed, but I had no trouble (except at the very end, oddly, when the encore ending "Love Will Tear Us Apart" was sped up to the point of being hard to identify for a few moments) and, whilst it was very loud, I could hear the vocals.

What wasn't lacking was energy. From the band (Except newly returned Gillian who, true to form, was statue-like throughout) and from the wildly enthusiastic (at least around me) crowd.

As with the concert at the Troxy before Christmas, and no doubt at the upcoming Olympics and festivals, the setlist was a 'greatest hits' performance, with most of the greats being banged out enthusiastically.

Regret, Ceremony and Age Of Consent followed and then a favourite of mine, Love Vigilantes.

Another later track, Krafty, followed with Round & Round, Bizarre Love Triangle and True Faith following.

The lesser known 5 8 6 was a highlight for me and they rounded out the set with Perfect Kiss, the compulsory Blue Monday (great track, but does it really work well live?) and Temptation.

As always, we knew they were coming back on and they did so with Bernard asking "Do you like Joy Division?". Of course most people did and welcomed Transmission with enthusiasm.

The final track was Love Will Tear Us Apart, performed at a pace that, as I stated earlier, rendered it unrecognisable after the first few bars. Whether that was because the 11 O'Clock cut off was looming up or they just wanted to end on an upbeat note is hard to say, but the last verse was slowed to the stately pace the song is more usually known at.

I had enormous expectations of this concert and feared, after all these years, that I would be disappointed.

I've read the reviews that say the sound was 'crap' and that Sumner's not a natural front man (I go to concerts to see the band perform, not hear the lead man quip like Stephen Fry), but I came away feeling all my expectations hadn't just been met, but comprehensively exceeded.

The gig was loud, energetic and full of enthusiasm. Everyone I saw was having a great time from the tall twat with the inflatable mike in the front row to the rather classy looking dark haired woman I stood, and bounced, next to throughout the evening.

If the sound was terrible, it wasn't at its worst where I was as I enjoyed and recognised all thetracks and if New Order are missing Hookie, it wasn't apparent to me. 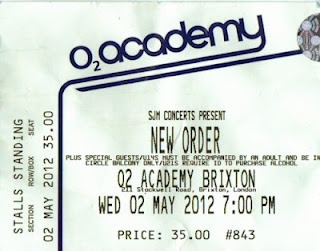 No doubt old-timers will say they were better at their peak, and who wasn't (certainly, I suspect, most of the audience), but this wasn't a sad group of 50 somethings doing a karaoke session, this was a great band celebrating their decades at the top with an audience who appreciated the importance (to them, if no-one else) of the band's music.

For me, this will always be one of the very best gigs I've ever been to - Thanks New Order!