I'm not an art expert or especially an art lover, but for a few years now (since my young son returned full of enthusiasm for a school trip to the place) I've felt I should perhaps stop in and see the collection at the National Gallery in London.

Dominating the backdrop to Nelson's Column in Trafalgar Square the Gallery is easy enough to find and a grand building with an impressive columned entrance. 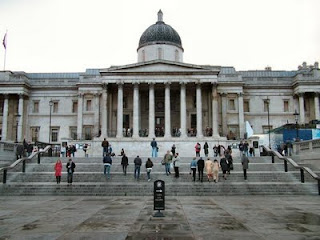 Entrance, thanks to the enlightened policy of some governments over the years (It's not always the case) is free, which probably explained the number of people on a Thursday lunchtime in April.

The collection(s) is (are) set out by period, with some as early as the 1200s, through the early 20th century (anything newer is in the Tate Modern - Also worth a visit).

To be honest, the early stuff was only of interest to me for its age and impressive condition. Most of it is religious in nature and naive in its composition and simplistic in colour. It doesn't really stack up to the later works, but it's interesting. 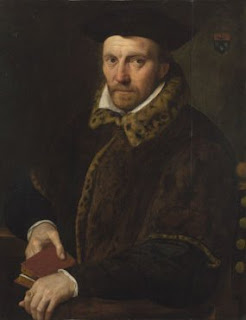 Interestingly though an odd painting here and there will startle with its naturalism (for example, the 16th century Portrait of Andreas Boulengier) in contrast to the icon-styled religious art.

There are a lot of Dutch and Italian works in the museum, including some incredibly detailed works by Canaletto of historic Venice, which caught my eye for their detailed draughtsmanship, incredible number of figures and for how unchanged Venice is. 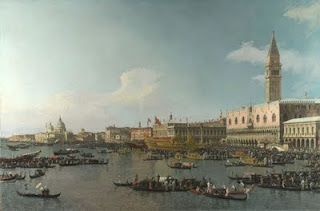 There are Turners, Constables, Stubbs, Van Goghs, Monets, Manets (including one frankly dreadful painting of a woman that looked like it was painted by an amateur!) and dozens of other famous paintings.

Standing inches from "The Hay Wain", Turner's "The Fighting Temeraire", Van Gogh's "Sunflowers" or Renoir's "The Umbrellas" was slightly surreal. These are such incredibly well known images as to almost feel unreal and yet there they were. 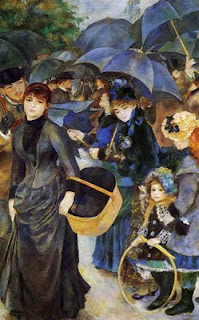 Personal favourites were "The Umbrellas", Akseli Gallen-Kallela's "Lake Keitele" (An artist and painting I'd never heard of!), Van Gogh's "A Wheatfield, with Cypresses", Gainsborough's "Mr and Mrs William Hallett ('The Morning Walk')" (If there's an artist I DO like it's Gainsborough oddly, having been made aware of the skill of his technique on a visit to Petworth House some years ago) and Francisco de Goya's famous portrait of the Duke of Wellington (With awards added over the years). 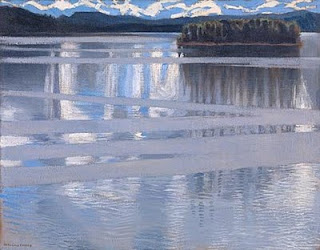 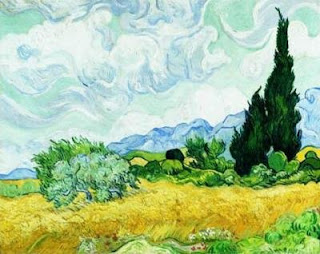 Above : Cornfield with Cypresses

I only had an hour (my lunch break) to spend in the Gallery and I wanted to spend longer, but it was a great place to visit and somewhere I recommend anyone with even half an hour (or a whole day) to visit.
Posted by Is that all there is? at 09:28