I don't get to see enough live performances.

This is the same thought I have every time I go to see someone perform, even a bunch of lads doing covers in a pub.

This, though, was something different for me. Aside from a few trips to the Comedy Store, a Warren Mitchell one-man show (actually very good) and a club-comedian at Lakeside once, I have never seen a live stand up comedy performance, but I decided it would be fun to go and see Milton Jones. 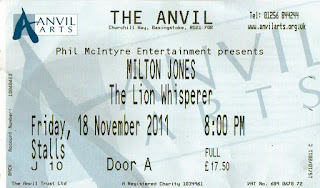 Most people will probably know Milton Jones from his appearances on Mock the Week, where he makes comic observations, often puns or a play on words.

The Anvil in Basingstoke is a fairly compact modern theatre and we had excellent seats near the front in the centre. Some people were far behind us and high up and I wonder how good their view was.

The act started with Milton's disembodied voice telling us "It's Friday Night, it's Basingstoke - There's nowhere else I'd rather be. I think I'll come on in the second half, before that we have another act James Ancaster, but first Milton Jones' Grandfather!"

If you've heard Milton on the radio you'll know he has an unfeasible number of Grandfathers and the audience mostly got that joke.

"Milton's Grandfather" doddered onto the stage lookig remarkably like his grandson in a flat cap and long rain coat and you can see where Milton gets his style from as his act was very similar. He opened with "I had a cousin in Popley - Is that a nice place" and then went on to explain how he enjoys working in the Post Office for the "crumpet" ("Widow number 4 please")and many other very funny observations. His readings from his "Little Book of Time" were very funny ("Wolfgang Mozart", "What?" being 2/3rds of a very good one, which took a little while to hit the audience and which he worked back in later on).

After about 15-20 minutes, he doddered off and James Ancaster came on. James' style is very different to Milton's but I think he went down well with the audience. My wife commented that she didn't think he was very funny until the finale, but she said that was very good (I won't spoil it, but it's about skydiving) and I thought some of his observations about hiding behind doors and pretending to be dead in the bath (I know, but it WAS funny!) were very good. I thought he was a worthy support act and being different wasn't just a Milton-lite.

There was an interval and when we returned it was to the 'Real' Milton Jones. 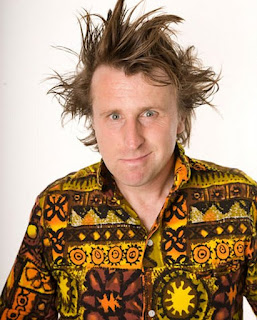 With his trademark wild hair and bright shirts, he looked very much as you'd expect if you've seen him on TV.

His first line was "I had a cousin in Popley" which caused a ripple of laughter and was responded to with "Oh, he's done that one has he?".

The set lasted over an hour, no mean feat given the rate at which Milton delivers one liners. No long drawn out stories of his life here, if you've heard a Milton Jones joke before or don't like this one, don't worry there's another one just seconds away!

Some of the material was familiar from Mock the Week or his radio shows, but most was unfamiliar to me and the vast majority was very funny and original.

Milton Jones responded well to the crowd (it wasn't really heckling, but people shouted things out) and had a clever knack of referring back to things earlier in the set, even off the cuff responses from the audience.

Especially funny, because they were new to me, were his "slide show" set, where he showed us some of the slides he'd taken on tour (again I won't spoil the twist) and the use of modern technology (one of those old fashioned overhead projectors!) to display numerous hand drawn images ("This is Uncle Joe - He's getting on, his eyes have gone").

Everyone in the audience around me was having a thoroughly good time. The audience ranged from pre-teens to people well beyond retirement age and this highlights another unusual aspect of Milton Jones' Stand-up. He doesn't swear. At all!

The closest thing he got to risque was a joke that started "If I had a crystal ball...", but it would be a very odd person who could have taken offence at it.

Milton's quick wittedness and cleverness with wordplay doesn't need a string of expletives and manic performance (An arched eyebrow or shrug says so much when delivered expertly), which means that you can take your kids and grandparents along and chances are you'll all enjoy it!

He finished with asking us to help with a crossword clue "Grassy Upland - 4 letters M-something-something-R?"

"Moor, Moor, Moor" people answered - "I didn't want to leave it to chance", Milton replied, "Although someone in Leeds shouted 'Muddy'".

He did a short encore and then the lights came up, surprising us all with just how long his set had been.

Having seen a few "Big Names" at the comedy store and on TV, I was a little worried that I'd seen or heard most of Milton Jones' act already on various programmes, but although the style was unmistakably the Milton Jones from the TV or radio, it wasn't the same jokes and we all came away having had a thoroughly enjoyable evening.