I went along to see Joan As Police Woman at the Rough Trade East shop. 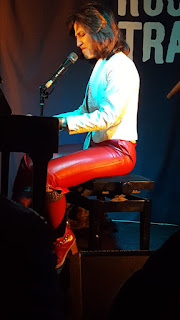 This wasn't a 'gig' as such, but a record signing with a bit of live performance as a bonus.

The far end of the shop was cleared and a tiny stage setup, in front of which we all gathered (I'd guess there was around 200 people there, maybe less).

Joan came on wearing a fake fur jacket and red leather trousers and sat at her keyboard (A guitar was also placed on the stage).

She said "Hi" and explained she would perform as much of her new album, "Damned Devotion" as was 'possible and appropriate' to her performing solo.

This equated to about 2/3rds and she sang for about 45 minutes.

I'm quite new to her material and I was very impressed with her voice in such close proximity, you could really her every note and even the whispered passages seemed on key to me (I wouldn't claim to have any professional skill in this respect, but there was no hiding place!).

The songs, too, were good with the familiar "Warning Bell" and "Tell Me" being accompanied by other tracks from the album.

For most of the songs, including those she didn't perform, she explained the background and what they song was about. 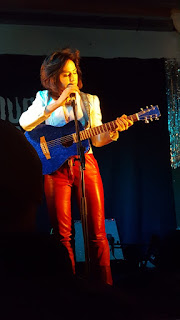 It was quite different to your usual, bigger venue performance and all the better for it.

Even better, we only paid the cost of whatever format of the album we bought (I got a CD for £10.99, others bought the vinyl for £19.99) and there was a chance to get Joan to sign them, but as I had a 2 hour journey home, I decided not to wait, as I'd really come along primarily to hear her and I left happy that I had.

Someone videoed the event and put it on Youtube.

An excellent performer, who I shall make a point of seeing again somewhere.