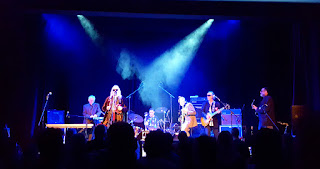 If you can find 3 reasons to be cheerful, you can't really complain can you?

So, Reasons to be Cheerful, part 1 - My sometime quiz mate, Steve, mentioned that The Blockheads were playing in the local venue in Fleet. The price was reasonable and I could walk there and back, rather than facing a long, expensive trip into London or elsewhere.

Reasons to be Cheerful, part 2 - I'd rediscovered the Blockheads after watching the excellent film, starring Andy Serkis, about Ian Dury and the band (in which Serkis performed all the songs with the Blockheads) and buying a compilation of their material. Impressively, the line of the bands, sans the sadly demised Ian, has remained remarkably intact, with Derek 'The Draw' (a good friend of Ian's I understand) now taking the front man role. The drummer, John, was far too young to be from the original line up (Someone quipped he was back at school on Monday), but everyone else was a Dury period member, including Chaz Jankel, instrumental (no pun intended) in the sound of the Blockheads.

Reasons to be Cheerful, part 3 - The Harlington Centre in Fleet isn't Shepherds Bush, let alone the Brixton Academy, so you do wonder what a band that once headlined major venues think when they turn up to such a venue and find about 200 people to play to.

I'm sure some acts would think it's not worth their time to deliver a class performance, but that's certainly not something you could say about the Blockheads last night.

Drummer aside, none of them are young men, but they know their craft and musically are top notch - If you listen to Blockheads material you'll know that the songs are musically quite complex (well, some at least) and the band certainly haven't lost their skill in that respect.

Another friend of mine there commented that it was a 'big sound' and it certainly would have been worthy of a packed, larger venue and yet they delivered an enthusiastic, fizzing, musically precise, hugely entertaining and enjoyable performance, as if they had a 2,000 strong crowd.

There were clear hard core fans there, who I suspect travel around to see them play, and I can see why you might, so much fun was the performance.

Derek manages to fill Ian's boots (if not Panties, who knows?) on the early songs, without being too pastiche-y and brings a different sound, albeit still familiar to the newer material (They have a new album out, so clearly the creative urge burns bright still).

Obviously, the classic tracks "Reasons to be Cheerful", "Hit Me With Your Ryhtmn Stick", "Sweet Gene Vincent", "Sex & Drugs & Rock & Roll" and "What a Waste" got the most positive reaction, but newer (and lesser known older songs) were equally good and performed with aplomb.

Like the seasoned old stagers they are, they deftly built up to a great finale and then came back for a short encore, finishing on "Lullaby for Francies" with the band drifting away one by one, until the stage was empty.

As bands do, they thanked the crowd and said how much they enjoyed performing for us. Bands usually say this sort of thing, but really, it looked like they really had as much fun as the audience.

If you go and see the Blockheads, you'll have plenty of reasons to be cheerful!

Setlist - From another venue, but reads right to me.

Hold Up
If I Was With A Woman
Express Yourself
Inbetweenies
Sorry
What A Waste
Wake Up And Make Love With Me
Billericay Dickie
Sex & Drugs & Rock & Roll
I Want To Be Straight
Undercover
Sweet Gene Vincent
Clever Trever
Reasons To Be Cheerful, Part 3
Hit Me With Your Rhythm Stick

From Wikipedia - I'm afraid I've forgotten who the Saxophonist was on the night, but he was brilliant!

Current members include Derek Hussey (vocals), Chaz Jankel (keyboards and guitar), Norman Watt-Roy (bass), Mick Gallagher (keyboards and piano), John Turnbull (vocals and guitar) and John Roberts (drums). There is rolling line-up of saxophonists that includes Gilad Atzmon, Terry Edwards or Dave Lewis and from time to time, the original sax player, Davey Payne. The band are best known for their hit singles, recorded with Dury, "What a Waste", "Hit Me with Your Rhythm Stick", "Reasons to be Cheerful, Part 3", and "Sex & Drugs & Rock & Roll".