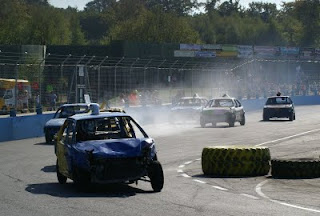 I live about 5 minutes drive from the Aldershot Spedeworth track, but despite being a life long motor racing fan, I'd never been stock or banger racing.

Last weekend, I put that right, mainly at my Son's instigation as he's always been very disappointed at the lack of crashes in the major series races we've been to see.

Aldershot is a very new circuit and I was quite surprised at the quality and safety features of the track. There's a stand (it's all metal, though, so I'd imagine it's scary in the wet!) and you can walk around pretty much all of the tiny oval.

To someone used to watching a circuits like Silverstone and Thruxton, the Aldershot oval looks too small for anything to be able to pass on, but as the Mini Stocks (original style Minis with square tubing welded around their perimeter), it became clear that it's not.

The Junior Ministock drivers were all kids (early teenagers, I guess), but some of them certainly knew how to drive. The cars were scattered around the track in groups with a couple on one side of the track and the bulk in a big group on the other (I believe drivers are graded and their roofs painted to indicate the grading - I guess this was why they were aranged in this way). The green flag dropped and the cars were off. Mini Stocks aren't out and out 'full contact' racers, but they're obviously allowed to nudge. 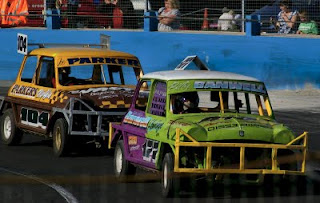 One particular driver was able to gently nudge the cars in front of him off line into the bends and dive up the inside. He did this time and time again and rose from the back of the big pack to 2nd place on the line (He actually did the same and won the other two races for these cars). 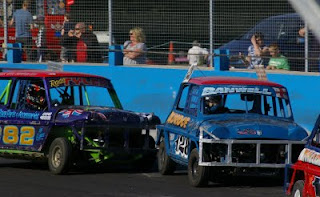 Next up were Junior Rods - These were small hatchback racers on narrow road tyres and clearly contact in these races was frowned upon. The racing was close, but there was less passing than in the Minis. Again the drivers were teenagers. 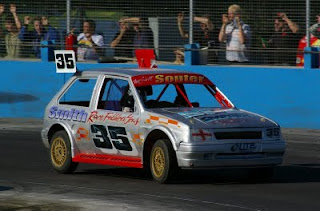 Next up was, to me, the highlight of the day. Slick shod Rods. These were out and out racers which looked like road cars, but clearly were heavily modified.

Once again the cars were arranged around the track. A couple of very fast cars, a Vauxhall Tigra and Toyota Corolla, tore through from the back to end up battling for victory over the last couple of laps in all 3 races for the class. 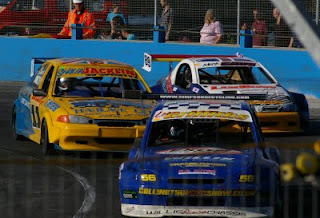 A Ford Mondeo driver put up a stout defence in each race, but eventually fell prey to the smaller cars putting less strain on their slick tyres. Contact was pretty rare (and not allowed), but there was plenty of passing as the faster cars, cut and thrust up the inside or around the outside of the rest of the field.

Final class of the day were bangers - These were Ryan's favourites and certainly delivered crowd pleasing action. For 3 laps the cars had to race, but after that they were allowed punt it each other with impunity and did so with relish. 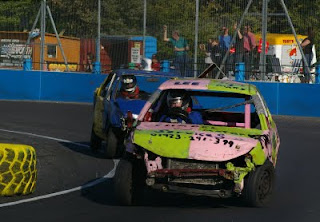 Most of the cars didn't look like they were driveable in the first race and a number fell out after each event. The final ended in a demolition derby and only one car (A Rover 200!) was still driveable at the end, with most of the others missing wheels and dramatically truncated through contact with each other and the concrete track walls. 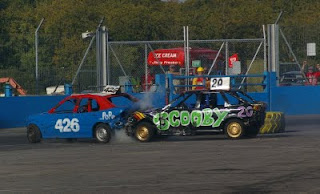 The event (held in bright warm September sunshine) was good fun (Although at £12 for 12 races it wasn't a cheap 3 hours racing) and I was very impressed by the slick shod racers and some of the driving skills on show (even amongst the young drivers).
Ryan loved the bangers and the demolition derby was a real crowd pleaser (Even I have to admit I found it 'fun' as a someone who thinks of himself as a motorsport fan).

We'll go again when racing resumes next year, I'm sure.
Posted by Is that all there is? at 02:55