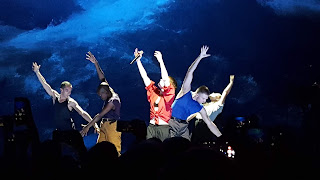 Christine and the Queens first came to my notice via the BBC's coverage of Glastonbury a couple of year ago.

With a distinctive sound (I'd say unique, but Lauren reckons she sounds quite like Haim - I can't see that!) and their intricate modern dance routines, they were certainly different and songs like Tilted and Science Fiction were also catchy enough to enjoy in their own right.

We'd missed her on the tour she/they (for the dancers are an intrinsic part of the performance) did around that time, but when a tour was announced for 2018, Lauren and I got tickets.

The venue was the Hammersmith Apollo, which on a second visit (after seeing David Byrne earlier in the year) I have to say I really like as a venue.

The support act was a young French guy who sang over his synthesiser pre-canned tracks - It wasn't my cup of tea at all and Lauren and I even went to get a drink towards the end of his set, where the busy bar suggested we weren't the only ones to not mind missing some of it.

I must admit, we worried that maybe Christine and the Queens would be equally disappointing during the interval, but we needn't have worried.

At more or less spot on 9PM the band and dancers appeared in front of a backdrop featuring a stormy and moody mountain scene. 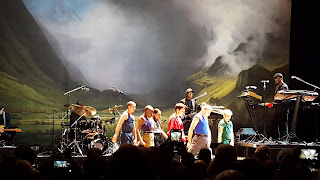 Opening with Comme Si, it wasn't (as is often the case) always easy to be sure if Christine was singing in French or English, but that's not really the point, although I'm sure she feels the lyrics are important.

I suspect more than a little, though, are lost in translation from French to English as evidenced by the next song, 'Girlfriend' which is 'Damn, Dis Moi' (Damn, tell me!) in French, but you couldn't complain about the performance, visual or audio.

Some tracks were, to me, more familiar than others, but Lauren commented on the way home that she recognised more than she expected and I was the same. 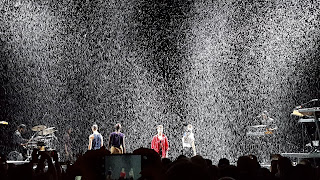 During the performance, the mountain backdrop fell away to reveal a stormy seascape and then a black drape at various points. It even 'snowed' at one point!

The complex choreography is definitely a big part of a 'Christine and the Queens' performance and definitely added to the overall experience, but Christine sang well and the band provided a good sound. 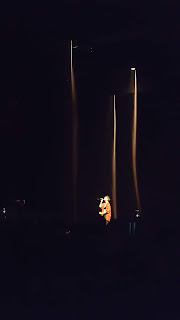 Christine obviously eschews convention, even to the point of not bothering with a conventional encore (kudos for that from me, it's become a cliché to finish the encore on your biggest hit!). A few moments after the stage lights went out, she was up on the balcony to sing Saint Claude and then was running downstairs to perform her last song 'A lullaby' (it wasn't!) Intranquillité from amongst the crowd on the floor.

By coincidence she ended up mere feet from us for much of this performance, before being borne away to the stage and then the house lights went up. 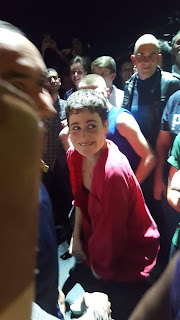 All around us women, young and not so were in floods of tears, one near us uttering 'I touched her!'. It was a rather strange and a little unsettling experience, to be honest. I thought this kind of adoration was dead! Judging by the number of women eating each others faces before the performance, she has a pretty dedicated Lesbian following, but the audience was very mixed, both in gender and age group.

For us it had been an enjoyable performance (Lauren gave it an 8.5 and I'd agree) which left us content with our evening and chatting about it on the way home. If I'm honest, I'm not sure I'd put her on the must see again list, but I definitely enjoyed the show.

Christine had chatted happily with the audience throughout and seemed a clever, witty young woman who certainly has a different way of performing and that can't be a bad thing. 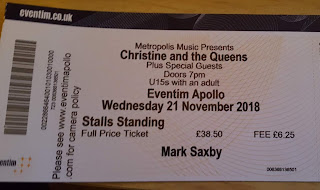