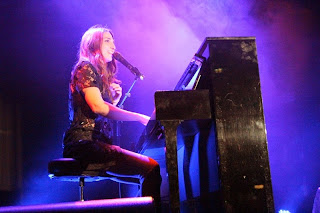 ...so, we (my 21 year old daughter and I) had waited some time to see her. In fact, we'd rather forlornly promised ourselves that "If she ever comes to the UK, we'll go and see her".

If she'd chosen the NEC or O2, we probably wouldn't have bothered, but when a message appeared in my email saying "Sara Bareilles is playing Islington Assembly Halls" I did a triple take.

First - She was REALLY coming to the UK? Yes, she was! Secondly - where the hell is Islington Assembly Hall? Well, unsurprisingly it's in Islington, but it's hardly the best known venue in London.

Sara Bareilles is, as I write this, still best known in the UK for her early hit "Love Song" (here it is if you don't remember it)

but she's had a lot more success in the US and is a bit of a rising star there.

We arrived at 7 in Islington and found a long queue snaking down the street. It was moving painfully slowly, so we decided to come back. After a quick ice cream (a great shop just across the road) we came back and sat waiting for some time until it had subsided somewhat.

Bouncers were informing people there was no support act (no loss, generally) and she would be on at 9, some 1.5 hours away.

We sat down and waited a bit longer, but by 8 decided to go in.

The venue is very small (ok, not Jazz Cafe tiny, but much smaller than Shepherds Bush), but was pretty much full (A second night had been added after the first sold out quickly).

Pretty much at 9, Sara appeared, alone.

With just an upright piano (and stool) in the centre of the stage (there was a drum kit and electronic keyboard hidden away at the back) it was fairly clear this would be a fairly 'stripped' set.

Sara arrived and started with "I know, I don't come here enough!", which was warmly received by the audience who looked about 70% 20 something women with a fair number of men and older women there too.

She started with "Uncharted" and, after being joined by a couple of musicians, followed it with "Love On The Rocks" and the iconic "Love Song", all to rapturous applause. She was good, don't get me wrong, but it was clear a lot of people were just happy to be in the same room, listening to her.

Between songs, Sara foul-mouthed bantered, good-naturedly with the crowd (To those in the seats upstairs - "I guess you didn't get here early enough, did you? Don't hate me!"), which was a bit of a surprise (although probably not to those who follow her on Facebook), but she smiled sweetly and got away with calling her audience "Fuckers" at least twice.

The set was pretty much a 'greatest hits' one, with some tracks from the most recent (is it really "new" still?) album, including the massive US hit "Brave" and "I Choose You", which is a bit twee when you read the lyrics, but just seems joyous when you hear it (especially live), and some from her previous two albums.

"Hercules" and "Gravity" (quite personal songs) were performed with feeling and then we had a couple of covers - "Blood Bank" by "Bon Iver" ("My favourite band", Sara told us, but neither my daughter nor I recognised the song) and "Sittin' on the Dock of The Bay" (If you don't know who that is, hang your head in shame!). Both were quite moody and dark, but the latter was a worthy (and different) cover version (I hate straight covers).

"Parking Lot" was performed for someone in the crowd and I'd never heard it before, so I've no idea if it's Sara's material or another cover, but she rounded out with "King of Anything" and "Brave"

Of course, we went through the tedious pretence of an encore, but oddly, she came back on alone and performed just one song, "Come Round Soon", which was a great performance and a worthy (if short) encore.

So, no support act, a long trip to North London and a short encore - Did I feel short changed?

No, it was a rare chance to see a great Singer/Songwriter do a pretty intimate concert. When she comes back she'll be at the O2 or the Albert Hall and I won't go, so I'm more than happy to have made the trip and, most of the time, support acts are terrible...

This was a rarity - I went to a concert with my wife!

She's not a fan of late nights or most concerts, but when I saw "The South" (a large remnant of "The Beautiful South") were playing at our local venue, I asked, as I often do, if she fancied coming along and expected her to say no, but to my surprise she was very enthusiastic. 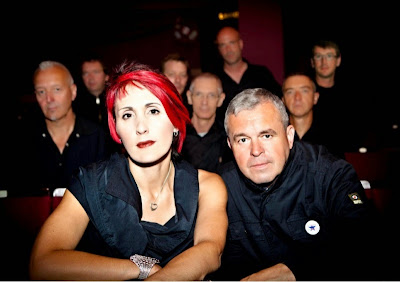 'The South' are fronted by original vocalist (and former Housemartins drummer!), Dave Hemingway, and Alison Wheeler, who's been in the band since 2003 (when it was still "The Beautiful South") as the female-vocal in the band.

There are plenty of other members of the band who were there in the "Beautiful" days, but the band isn't all about nostalgia as they've released an album, "Sweet Refrains", of original material recently and very good it is too.

They started out with a track from that album, "Stick It In and Turn It", which certainly set a positive tone and got the fairly crowded (albeit tiny) venue (more than once Alison commented she'd never been THAT close to an audience before) straight into the mood.

A couple of lesser know songs followed and then the massive hit, "A Little Time" which I thought was better than the single release as Wheeler's voice is less scratchy (in my opinion) than Jacqui Abbott's on that track (which appears to have been a conscious thing on her part, to be fair)/

'Pigeonhole' was a stand out amongst the newer tracks, but the tempo and buzz didn't flag all evening, getting better as things went along, if anything.

Crowd favourites like "Old Red Eyes Is Back", "Song for Whoever", "One Last Love Song" and "Rotterdam" were mixed in with less well known tracks like "We Are Each Other" and "I Think the Answer's Yes", but all were well performed and enthusiastically received.

The original set ended with "Don't Marry Her" and "Perfect 10", much to Mandy's delight.

They vanished for a few moments and returned to give us 3 more songs, ending with "You Keep It All In" and "Good As Gold".

You often wonder if a band missing a key member or two will be a bit of a pale shadow, but "The South" certainly deliver the goods and, most of all, know how to put on a show that entertains and engages an audience.

It was a bit of a masterclass in a 'feel good' gig and I'd happily spend a night with them again anytime!

So much so, in fact, that I'll go as far as to say I think you should, too!

Encore:
Woman In The Wall
You Keep It All In
Good As Gold

Finally a word on the support act, "Steel Threads". It's usually a thankless task being a Support Act, but they were engaging and entertaining (asking the audience for requests of covers as well as doing their own material). Laura is a great fiddle player (although I'll concede I've not spent a lot of time listening to fiddling) and also a lovely singer. Their cover of The White Stripes "Seven Nation Army" being excellent (I heard the lyrics for the first time!), but they were very good value all round!