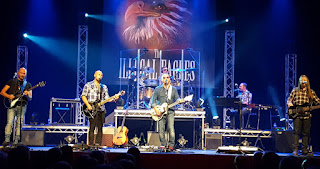 I'd never been to see a 'tribute act' before and I'll be honest it was with some trepidation that I did, but you're never going to see "The Eagles" perform again and it was very local and I'd read very good reports of "The Illegal Eagles", so I decided to take a chance.

I'll be honest, I've never much liked the idea of 'tribute acts' - People performing other peoples' songs 'pretending' to be them was my perception, but it didn't really feel like that on the night and I can see the appeal to people who won't ever have the chance to see their favourite acts perform live.

First off, The Illegal Eagles (line up Phil Aldridge, Trev Newnham, Al Vosper, Christian Phillips, Greg Webb and Gareth Hicklin) are a very personable bunch to spend an evening with. As Trev observed at one point, "We don't take ourselves too seriously" and they also don't try to 'be' The Eagles.

I'm not a musician, but I thought musically they were excellent, delivering some of the intricate Eagles' numbers solos with precision and feeling. They also seemed to have the harmonies perfected and these two areas (instrumental solos and harmonies) were where they worked best for me.

The downside I feared with a tribute act that I did find was that they don't SOUND like The Eagles. Vocal performances are very hard to replicate with perfection and I don't think they try to mimic the originals, although they do aim for a similar sound, which is probably a better idea.

Some vocal performances, to my ear, worked better than others, even some of those where a solo voice front and centre (Gareth, especially, was excellent on a couple of songs) and it would be unfair to say they were anything other than very good - This certainly isn't your average bunch of musicians doing covers, they really master the instrumental, harmonies and overall 'sound' of the records, but ultimately, you can't sound exactly like the original singer.

Does this really matter? Well, obviously not to the majority of people there. I'm sure most happily listen to their Eagles CDs and Vinyl, but can enjoy the Illegal Eagles for their quality of performance and (the now impossible with the originals) chance to hear their favourite Eagles tracks performed live and let's be honest, lots of older performers no longer sound like they did (in a few cases they can sing better, but some big stars have voices that are totally 'shot' and yet they still attract big paying audiences!)

A good half of the audience responded that they'd seen the band live before and I suspect a good number of those who hadn't will next time.

The band started with a couple of Eagles songs I didn't recognise(I'm not a hard core fan), but they hit their stride with some of the big hits, including "New Kid In Town" (a favourite of mine for reasons I find hard to explain to myself!), "Lyin' Eyes", "I Can't Tell You Why", "Life in the Fast Lane" and rounded off their two song Encore with "Desperado". 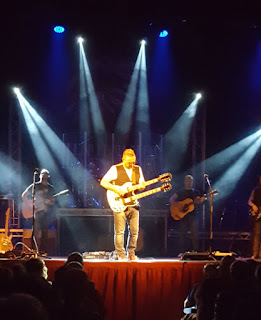 For me, the highlight of the performance came after the interval (it was an older audience on the whole, who probably needed a toilet break!) when they started with "Hotel California" - Al's intro was spine-tingling and the whole band absolutely 'nailed' this classic track (as I posted on their Facebook page!).

I still can't say I'm 100% sold on the tribute act as a concept and won't rush to see others, but The Illegal Eagles performed these great songs brilliantly and with clear regard, skill and dedication, so I came away humming and very happy with my evening out. 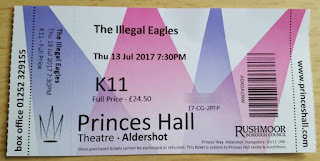 If you like live music and like the Eagles, I can't imagine there's a better way to enjoy these songs than to go along and see the hardworking, talented and entertaining "Illegal Eagles".

Setlist:
Unfortunately I couldn't find a setlist, but if you have one, let me know