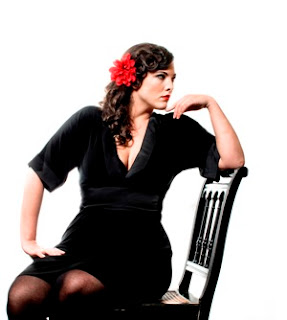 I saw a CD in an HMV one day and the bright red cover caught my eye.

It was "Deleted Scenes from the Cutting Room Floor" by Caro Emerald.

I didn't know if Caro was a person or a band and none of the track listing meant anything to me.

A while later, I stumbled across it again on Amazon and listened to some of her stuff on YouTube.

Caro Emerald is a Dutch singer and her first album is a mix of 50s glamour, latin rhythms and 21st century pop.

Loving the album, I ordered up two tickets to see her at Shepherds Bush in December and took along my 19 year old daughter (who also rather likes her stuff).

I'd forgotten how tiny the floor is at Shepherds Bush Empire (O2 Empire now I believe), but it's the only place to be in my view and it guaranteed an intimate experience, with both those on stage and around you in the audience as the show was a total sell out.

There was no support act, but that turned out to be just fine.

About 8:15 the band appeared and then Caro to tumultuous applause.

The first song was "That Man" which set the mood nicely, but it was clearly an audience in the mood to enjoy themselves.

Caro and her excellent band rattled through the upbeat "Just One Dance" and "Rivera Life" before things slowed a little with "Two Hearts" (one of the few songs not on her album) and then into the song that launched her career, "Back It Up", which is probably the least representative song of the rest of her material, being less 50s influenced than the rest of her material (the story is she was 'discovered' when providing a sample vocal for this song when the writers wanted to sell it to a more established artist - You wonder who it might have ended up with if fate hadn't intervened?).

After a quick change, whilst the band kept us on the boil, Caro returned for a couple of ballads, "The Lipstick On His Collar" and "The Other Woman", both full of bitterness and lament, which is something she does very well.

The next song was a new single, "You're All I Want For Christmas" (Not the Maria Carey song with a similar name!), which is actually released as a duet with Brook Benton (posthumously), but which she performed solo, showing off the sweeter side of her voice well.

Next it was back to upbeat with "Dr. Wanna Do" and then another ballad, "I Know That He's Mine". The juxtaposition of styles showing off Caro's range well, varying between frothiness and moodiness both visually and vocally without ever looking or sounding phoney.

The main set came to an end with the pounding trio of "Absolutely Me", "You Don't Love Me" and the wonderful "A Night Like This", but we all knew there was more to come.

The first encore was "Close To Me", another track which, she told us, she only performs live. Being less familiar it was perhaps hard to judge against the other songs, but (dare I say it?) didn't seem that remarkable to me.

Fortunately, she saved the rattling good "Stuck" ("Baby take me anywhere, but not here again!") for last and had everyone on the floor (and most of those in the tiers of chairs above) singing and dancing along.

For a final encore, she returned and performed a heartfelt rendition of "Love Is A Losing Game" in honour of Amy Winehouse and did a good job of it too, delivering it with pathos and feeling.

A quick glance at my watch revealed the Caro and her band had been on stage for over an hour and a half, but the time had flown by.

Caro Emerald strikes me as woman who wants you to enjoy her music as much as she seems to enjoy performing it and that was exactly how I felt.

The show was fun and enjoyable and she came across as a very friendly person who was, perhaps, a little surprised that she had attracted a full house so easily, but her performance was fine reward (as was that of her band who all had their moment centre stage and played their part in making the show such a success).

Heading back to Westfield's car parks, people were dancing along the street in the cold - The best recommendation I can think of! 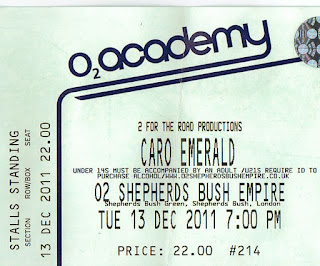 In years to come, people who weren't there will tell you they saw Caro Emerald at Shepherds Bush!

For another review see http://www.entertainment-focus.com/music/articles/caro-emerald-tuesday-13th-december-2011-shepherds-bush-empire-london
Posted by Is that all there is? at 10:28