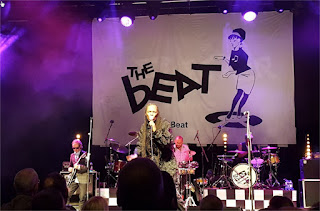 So, when I saw they were playing in Guildford, I bought myself and Lauren a ticket.

The tour was a co-headlining one with "The Selecter", who I'd seen once, many, many years ago in a dreadful performance in Bournemouth (That night saved by the exuberance of "The Bodysnatchers" in a 3 hander Two-Tone gig - I can't recall who the third band were!)

On the Friday evening before Christmas, there were a lot of people looking to enjoy their evening. The audience had its fair share of fat 50 somethings in pork pie hats, but also plenty of youngsters, and not all there with their parents.

The Beat were up first and, with a tight timetable, Ranking Roger wasted no time, starting at 8 sharp with "Whine & Grine" medleyed with "Stand Down Margaret" to the delight of the crowd.

After that he explained that his son, "Ranking Junior", was suffering from the flu, so he was on his own tonight, but that "Junior" might appear at some point (He did, for "Side to Side", to a warm reception from the crowd).

I'd been to see Squeeze at G-Live a couple of months earlier and it's a good venue, modern and a nice size (not too big), but I found the sound then of the vocals was pitched at the wrong level for me on the floor and the same, sadly, was true for this gig. The vocals weren't totally inaudible, but not at the right level to be clear above the instruments. I don't know if the sound is better further back or maybe up in the balcony, but this might well put me off going to see anyone there in future.

With only an hour, The Beat delivered a cut down set (The headliners alternated on this tour and "The Selecter" got the role - and the extra time - at Guildford), but it was enjoyable and energetic, as we'd expected from Ranking Roger, but, good thought it was, it didn't match the energy and excitement of that Reading gig, partly, I'm convinced, because at Sub 89 there is no real stage and the, small, audience and the band share the floor! The sound, too, had been better balanced at Reading.

Stand outs for me were "Hands Off...She's Mine","Too Nice to Talk to", "Click Click", "Ranking Full Stop", "Tears of a Clown" and "Can't get used to losing You", but once again Ranking Roger's energy was infectious and the set was very enjoyable, if, by comparison with Sub 89's a bit detached.

So, a very enjoyable performance from "The Beat" by most standards, but not a match for the last time we'd seen them.

There was a 30 minute or so break, while the stage hands switched the branding and we (and everyone else) queued forever for a drink.

We managed to get back in before "The Selecter" started and my first thoughts were that I wasn't going to enjoy them for a second time. 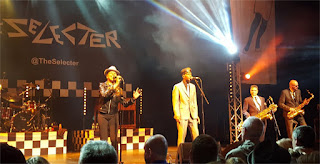 Pauline Black is a very mannered performer ("Weird" Lauren described her as and I won't quibble), whilst long time band-mate, Arthur 'Gaps' Hendrickson acted as a good foil to her and provide some welcome balance to the vocals (The sound balance seemed better, if not ideal, for them).

The rest of the band looked like young session players, but the sound was familiar, from the opening "Avenger's Theme", through recent track "Frontline" and "Three Minute Hero", but even with the familiar tracks, I wasn't warming to them really.

It wasn't really until "On My Radio", a good 2/3rds of the way through, that they hit their stride for me and I really started to enjoy myself and it and "Too Much Pressure" were the undoubted highlights for me (along with "Madness" performed as part of the excellent encore with Ranking Roger).

I personally wouldn't pay to go and see "The Selecter" alone again (to be fair, I rarely see bands repeatedly), but they 'got' me in the end and I would say their set overall had been enjoyable and added to, rather than detracted from, my enjoyment. 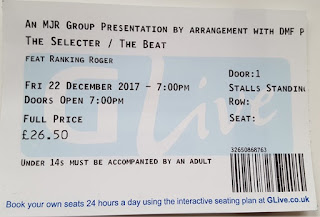 By the time we left, humming our favourites and discussing the gig, I was definitely in a festive mood.

The Beat
From another gig, but pretty close to G-Live, although they played "Side to Side" and "Too Nice to Talk to" as well and obviously dropped a few - I don't recall "Rough Rider" or "Said We Would Never Die".
Whine & Grine/Stand Down Margaret
Hands Off...She's Mine
Twist & Crawl
Doors of Your Heart
Save It for Later
The Tears of a Clown(Smokey Robinson & The Miracles cover)
Click Click
Can't Get Used to Losing You (Andy Williams cover)
Rough Rider(Prince Buster cover)
Said We Would Never Die(The English Beat cover)
Best Friend
Ackee 1-2-3
Sole Salvation
Ranking Full Stop / Mirror in the Bathroom
Jackpot(The Pioneers cover)

The Selecter
I know the order is wrong here, it's from another gig on the tour as "Missing Words" was played earlier and they played "Frontline" at one point too.
The Avengers Theme(Laurie Johnson Orchestra cover)
Out on the Streets
Three Minute Hero
They Make Me Mad
Breakdown
Celebrate the Bullet
Danger
See Them A Come
Black and Blue
It Never Worked Out
Street Feeling
Train to Skaville(The Ethiopians cover)
James Bond Theme(Monty Norman cover)
Missing Words
On My Radio
Too Much Pressure / Pressure Drop 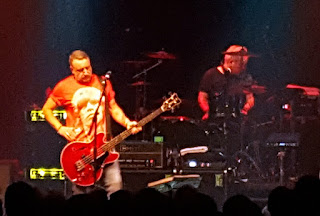 I'd seen Peter Hook a couple of times before and had slightly mixed feelings...

The first time was when he performed the two Joy Division Studio albums back to back and a few New Order tracks as a bonus.

I had really enjoyed that gig, but a second visit, to see him perform the first two New Order albums felt a bit flat, especially for the first album.

At the time, I suspected some (at least) of that was due to the material - that first NO album falls rather uneasily between a JD album and the different direction New Order would take as they came to terms with the loss of Ian Curtis.

When I saw that Hooky was to perform the two Substance albums (effectively the first 'greatest hits' albums of the two groups), I decided this wouldn't suffer that problem and booked myself a ticket, deciding to drive the 50 miles to Salisbury (a city I used to visit frequently in my early years, but have only, rarely, passed through more recently) rather than face the rush to catch a train home from London.

I set out early and got to Salisbury about 6:15, time to grab a Nandos and wander briefly around the few Christmas market stalls still open and decide I really do need to go to Salisbury for a day sometime again, before making my way to the City Hall.

I'd been here once before, with my son, to see Milton Jones, so I knew what to expect.

Arriving about 45 minutes early for the scheduled 8PM start ("No support" - There was a lot of material to cover, so no loss there!), I decided to take a seat as it was unallocated standing or seating as I wished. My plan was to sit for a while and get up and go to the floor once they appeared on stage, but somehow I never did and I had the relative novelty of sitting throughout the event.

Whether that changed my view of the gig is hard to say, but this is what I felt.

Hooky and his band appeared about 8:10and went straight into a trio of early New Order tracks, "In a Lonely Place", "Procession" and "Cries and Whispers", before starting into New Order's Substance proper with "Ceremony" and "Everything's Gone Green".

I can't ever shake the feeling that Peter Hook isn't Bernard Sumner vocally and, whilst some of the tracks were great, especially "Everything's Gone Green", "The Perfect Kiss", "State of the Nation" and the little played "1963" that rounds out New Order's Substance, and Hooky's base is unmistakable and missed from the current New Order lineup, despite his replacement's best efforts, it didn't really sound like New Order.

It was good, but, given the choice, I'd rather see the current New Order perform Substance, just because Peter Hook, and one of his colleagues who sang a few of the songs, just don't sound like Barney.

I'd imagine it's a bit like seeing Queen, with someone other than Freddie Mercury singing (Not a band I've ever liked, but it seems doubly pointless to see them without their iconic frontman). Also, as NO tracks become more electronic, there are parts where Hooky's bass isn't employed and at times he looked at a bit of a loss, waiting for his chance to return to the fray.

After the New Order set, there was a 15 minute or so interval and then they were back, starting into "No Love Lost", "Komakino", "These Days" and a couple of other early tracks, before launching into the original Substance LP order with "Warsaw" and "Leaders Of Men".

I think it's true to say that Peter Hook does "Joy Division" better than "New Order" - His vocal style on these tracks does mimic Ian Curtis' to a degree, but does so well, and so they sound more like the recordings and whilst you couldn't quibble about the enthusiasm Hooky put into the NO part of the gig, he seemed more comfortable and engrossed in delivering the JD material. 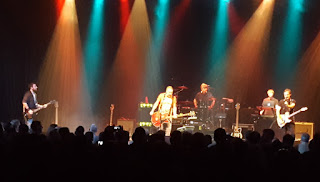 The workrate was relentless, for both albums the tracks followed on instantly from the end of the previous one (A constraint of time, I guess) with few chances to interact with the crowd, except to put one heckler down very effectively early on, wonder at the gap between the audience and the stage and to a have a bit of a joke at one point when the other bass guitarist was having sound issues briefly.

For much of the gig I wondered at the wisdom of performing New Order before Joy Division, but the last 15 minutes of the gig proved Hooky knew what he was doing.

Ending the night on "1963" would have been anti-climatic, even with "Bizarre Love Triangle" and "True Faith" directly before, but by ending on the LP order of Joy Division (actually the latter release of the two, so perhaps another reason for the order, given Factory's obsession with numbering everything!) we were treated to a finale of "Atmosphere" followed by "Love Will Tear Us Apart".

If maybe Hooky doesn't do some New Order tracks as well as the remaining members, they certainly can't hold a candle to his performance of "Love Will Tear Us Apart".

You could have forgiven even a generally dreadful performance for the sheer brilliance of that, but of course, there was nothing to forgive as it had been quality entertainment throughout, even if I'm more convinced than ever about where Hooky's ultimate strengths lie.

As the last note died, he wished the audience a thank you and a Merry Christmas, before the lights came on and we left - No encore required - Nothing could top that finale!

PS If my review sounds a bit negative on the New Order performance, don't let me put you off. I've been to see Peter Hook and the Light 3 times since he left New Order and I rarely see a band twice.