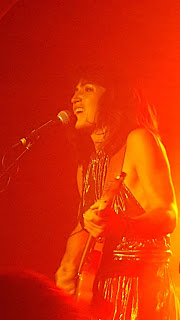 I went to see Joan Wasser (Joan As Policewoman) do an acoustic appearance at Rough Trade East earlier in 2018 (In fact, I'd only seen David Byrne in the meantime, looking back) and was very impressed with her voice and easy manner.

After that I saw she was doing a tour with a band, but London's appearance was at the Royal Festival Hall, which didn't really appeal and was the day after I returned from a long-haul holiday, so I gave it a miss.

Coincidentally, she was performing in Venice when I was there for a few days with my son, but it was a treat for him and he's not really into concerts, so again I had to give it a miss, but vowed that I'd go and see her next time around.

Luckily, that turned out to be much sooner than I expected, as a few extra dates were added to her tour, including one at a venue I didn't know, Omeara, in London.

I snapped up a ticket and found out it was near to London Bridge, so I figured I could get home OK (I live an hour's train ride south west of London).

The day rolled around and I made my way to Omeara, finding one of the smallest venues I've been to with a tiny stage.

It's not as small as the Boilerroom in Guildford and maybe not quite as small as the Jazz Cafe in London, but it was certainly not what I expected after the previous London venue was the Royal Festival Hall!

Support was by a duo called Dirty Nice. They were OK, the singer had a decent voice, their sound was OK (if a bit disjointed at times, with electro pop intros giving way to hip-hopish main parts - I'm really out of my musical comfort zone here, so that may not have been the style at all!) and they were joined by a young woman with a pleasant enough voice for one song, but, whilst not offensive, they weren't really my thing.

At almost exactly 9, Joan and her 3 band members came onto the tiny stage.

I'd ended up at the very front as the hall had filled to capacity (at least - I was rather glad to see a fire exit a few steps away!) and so got a great view of the stage. 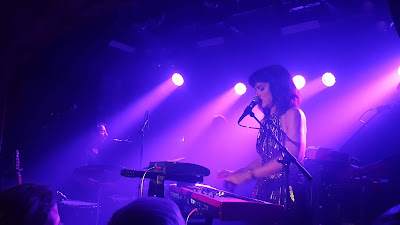 They started with Wonderful (which is, in my opinion) and then worked through a mixture of tracks from 'Damned Devotion' (the latest, and excellent, album), including "Tell Me", "Warning Bell" and "What Was It Like" and back catalogue material such as "Eternal Flame", "Human Condition" and "The Silence".

Throughout the performance, Joan chatted with the crowd and her bandmates and some time of the full set was undoubtedly lost, so there was barely a moment before they returned for the inevitable encore.

This included the excellent "The Magic" and ended on a slow paced version of Prince's "Kiss" (The most covered song of the last 30 years?). Sadly, my last train was 11:15, so I had to leave part way through this (promised to be the last song), but the performance had been excellent.

I was glad to have seen Joan perform with a band. I'd been mightily impressed with her at Rough Trade, but ultimately I guess I just prefer the sound of a full band and the songs were more familiar in this form, too.

The venue was, I suspect, perfect for them. Joan commented that this sort of venue was their favourite and the set was moodily lit throughout, with plenty of smoke giving the atmosphere, but thankfully not the noxious fumes, of a smokey jazz club from the '70s, helped by Joan's gold lame jumpsuit and glittery eye shadow. It was though, stiflingly warm - I dread to think what it would have been like a couple of weeks earlier in 30C+ heat! 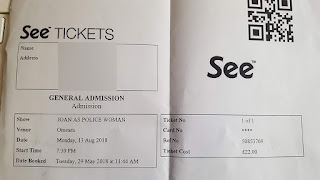 When I told a friend I was going to see Joan As Policewoman, she had no idea who I meant and asked how I'd even got to hear of her, which is typical of Joan As Policewoman's profile, at least in the UK. There are a group 'in the know' (some clearly huge fans) about her, but otherwise she's almost unheard of, which is a crying shame as she has a great voice, writes some great songs and puts on an excellent live performance.

If you get the chance, go see her (and the band if possible)!

Setlist: From another gig, but not a million miles off, although I know "Start of My Heart" was in there.
Wonderful
Warning Bell
Tell Me
Eternal Flame
Honor Wishes
What Was It Like
Steed (for Jean Genet)
Rely On
Valid Jagger
Damned Devotion
Human Condition
Talk About It Later
Silly Me
I Don't Mind
The Silence
Encore:
Christobel
The Magic
Kiss (Prince cover)