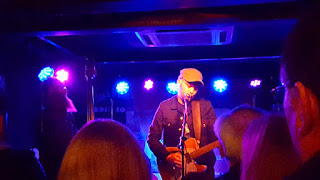 Ben Watt is best known as 'the other half' of Everything But The Girl.

Of course, for many (me included) EBTG is so much (his wife) Tracey Thorn's voice that Ben's contribution (music and songs) is often overlooked.

The few EBTG songs he does sing are good ("25th December", "Only Living Boy In New York" ,etc), but not those that immediately spring to mind!

I'd seen promotions for Ben touring before, but never really considered going to see him, but an email listing a gig in nearby Guildford at a low point in my typical January blues piqued my interest enough to check out his more recent solo work online and I liked what I heard. Enough to order up a ticket, in fact.

When the gig rolled around, I had a cold and it was a wintery night. I almost decided to stay at home and write the ticket cost off (It wasn't a lot), but in the end decided I should get out.

The Boiler Room is an old pub in Guildford, near the Friary Centre, but the performance space is tiny.

This tour featured Ben with just Rex Horan on Double Bass. A very intimate kind of act, which worked well in the tiny space of the Boiler Room.

Most of the tracks were from Ben's most recent solo albums, Hendra and Fever Dream, but he threw in a few EBTG songs, including Rollercoaster, which, of course, he wrote for Tracey to sing. The fact that it seemed so right in his voice is perhaps really not that surprising as he was the writer and it deals with the aftermath of the serious illness he suffered in EBTG's heyday.

The newer songs showed Ben's song writing, guitar playing and singing skills well and I must admit to feeling a little ashamed at my thoughts of staying at home, I really would have missed something excellent!

Ben is certainly not a showman, but he's a confident and unassuming performer, happily quipping with the audience (Although small, the venue was sold out and packed!) and providing the back story to the songs.

Rex Horan played his part to perfection and the feeling was very much of a private jam session in someone's front room!

It was hard to pick out a favourite, but Nathaniel, Rollercoaster and Gradually certainly stuck in my mind. 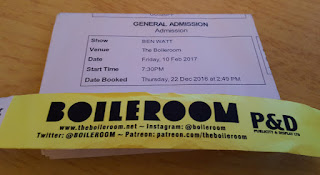 I came away very happy with my decision to venture out that cold February night.

Of course, I'd still love to hear Tracey Thorn sing live (I fear it'll never happen, though), but now when I listen to Everything But The Girl, it is with different ears and much more appreciation for Ben Watt's part in the band.

If you get the chance, go see him!

Setlist
from another venue, but close, from memory - I think he played "The Gun" at one point