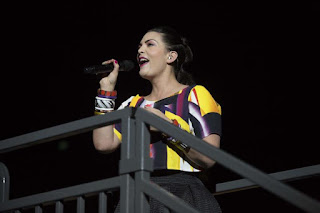 We saw Caro Emerald back in 2011, when she was still relatively unknown, at Shepherds Bush and, as you can read elsewhere, had a great evening.

These days, her tickets demand a premium price and I wasn’t planning to go and see her again (or go to any more events this year) until someone on a forum I frequent offered a couple of tickets near my home at a much reduced price. Lauren and I set off for the Bournemouth International Centre on a chilly December evening, parking in the Richmond Hill multi-storey and walking through the Christmas stalls and ice rink in the Winter Gardens before making our way in.

We were a little unsure about the fact that our tickets were seated, as we usually stand (and dance!), but once inside, it became clear that we were missing nothing as the ‘floor’ was covered in seats too! Our seats were in the first section of seats and offered and excellent view of stage.

At 7:45 sharp the support act came on. Andreya Triana is a singer with an impressive voice, although I struggled to think who she sounded like on the first few songs. She was impressively backed by just a single guitarist and it took a lot of nerve to perform to a venue the size of the BIC with just your voice and a guitar, but the duo did it impressively and deserved the warm applause they received.

There was a 30 minute interval (and a couple of drinks) and we were back into the hall for the main event.

The band appears in twilight and, expecting Caro to suddenly appear in a spotlight on stage, it was a shock/surprise to suddenly see and hear her a few rows down, on a staircase amongst the crowd.

She started with a heartfelt rendition of “The Other Woman” (oddly the track that I’d heard first on my MP3 player a few days earlier) before returning to reappear on the stage and rattle through “Absolutely Me” (“When it gets to Friday, what you get is absolutely me” – Very apt!), “Riveria Life” and her breakthrough single “Back It Up”.

She then performed a newer track “Quiksand” and a couple of other familiar tracks mixed in with a couple of enjoyable covers, “History Repeating” (a favourite of mine) and “All About That Bass”.

Eventually she turned to the audience and said “If you’re going to stand up, now is about the time to do it” and when people started to sit as she finished she said “Ah, ha, what are you doing?” – By then everyone (who could stand – The audience was pretty elderly overall, which hadn’t been so predominantly the case back at Shepherds Bush) was on their feet and stayed there through to the main set ending “Stuck” (She ticks my boxes, this being one of my favourite of hers too!)

Whilst the encore is a bit of a cliché these days, there was no disgusing the enthusiasm of the crowd for me as they clapped and stamped and called for a return.

Of course, return they did and delivered “Tangled Up”, new track “Helicopter Boy”, which would, I suspect, be a storm with a remix and summer release and the rousing “A Night Like This” which had everyone singing along.

After Shepherds Bush I wrote “In years to come, people who weren't there will tell you they saw Caro Emerald at Shepherds Bush!” and it’s true to say I didn’t feel quite the same way after the BIC.

Back in 2011, she was slightly shy, slightly bemused by her success and it had the feeling of an intimate gig with someone who only a (sizeable) few were aware of. In 2015, her success has made her more confident, more polished, but no less enjoyable or entertaining.

Quite why the BIC felt that such a feel good performer (and her entertaining band, at moments I had flashes of being at a Kid Creole & The Coconuts concert again - It had the same kind of all round entertainment, fun, feel-good vibe) would attract an audience keen to sit and not dance is beyond me, but overall we had a good time and came away humming and chatting excitedly about our favourite moments.

If you’ve not seen the ‘shocking Miss Emerald” yet, treat yourself to a fun evening out - We were certainly glad we had again and, so it seemed, had everyone else there!

SETLIST
Miss Emerald: Intro
The Other Woman
Absolutely Me
Riviera Life
Back It Up
Quicksand
The Lipstick On His Collar
Pack Up the Louie
Black Valentine
History Repeating (Propellerheads cover)
Dr. Wanna Do
I Know That He's Mine
All About That Bass (Meghan Trainor cover)
Just One Dance
Liquid Lunch
You Don't Love Me
That Man
Stuck

Encore:
Tangled Up
Helicopter Boy
A Night Like This