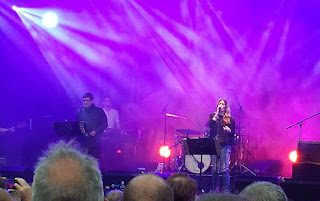 The first was Franz Ferdinand, but they were on whilst I was on holiday. I actually booked tickets for the Ting Tings, but then they cancelled the gig!

So, 3rd time lucky and I booked to go and see Paul Heaton and Jacqui Abbott, formerly of the Beautiful South (and Heaton of the Housemartins before that). Mandy and I had really enjoyed The South, but though there were mostly former Beautiful South members, the voices you recall from the "Beautiful South" are Heaton's and Abbott's.

I saw them perform at Glastonbury, via the magic of the BBC i-Player and thought there were OK, but maybe not great, but still, a gig's s a gig and usually fun.

Fortunately, amidst a dreadful Summer to that point, the weather played ball and it was a pleasantly warm, dry evening as I walked from Waterloo to the Strand and into Somerset House's open courtyard. There was a bit of a queue to get in and huge queues for the food and drink stands around the courtyard.

In the centre, at one end, was a stage, rather like those you see at Festivals, but a little smaller, I guess. I needed the loo after an hour on the train, so walked around behind the stage and downstairs to the Gents. Business done, I headed back upstairs where a long haired woman in jeans was smoking a cigarette as people passed by her. I did the typical double take, but sure enough, it was Jacqui Abbott! No-one else seemed to notice her and I decided to not be the tongue-tied fan (What would I say? "I hope your good tonight" or "Have fun" or "Do you think smoking is good for your voice, let alone your lungs?") and returned to the front of the stage.

As I'd queued to get in the support band had finished, so I can't tell you who the were or if they were any good. 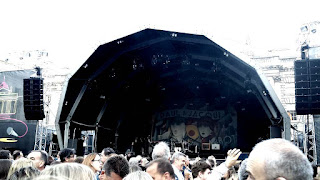 The band appeared first and then Paul and Jacqui joined them.

They started with Wives 1,2 & 3, which whilst a post "B.S." song is very like their output and it was a good, upbeat number to start with, followed up with the classic "Old Red Eyes Is Back", which had all the crowd around me singing along.

They slowed things down with Real Hope and Have Fun (another Beautiful South song, but one I must admit I didn't recall) and then another more recent song "The Horse and Groom".

Whilst later, post "Beautiful South" songs were applauded, the real enthusiasm was for the big hits and it was good to hear some Housemartin tracks included, not least Caravan of Love, performed acapella as the finale to main set.

Rotterdam, Happy Hour, Perfect 10 (in a different, but really enjoyable arrangement) and Don't Marry Her (the naughty version, sung enthusiastically by the crowd) were all great and greeted with rapturous applause.

The audience were mostly 40+ somethings, but there were younger people there too, who clearly had come alone for a fun night out, although the 30 somethings just in front of me impressed me with their knowledge of Beauitful South lyrics - I guess it's not imposssible their parents were fans! There's a sobering thought...

The Setlist records two Encores, which I'd forgotten, but they weren't gone for long before either and delivered up "A Little Time" and "You Keep It All In" followed by

It had been a great night's entertainment. The venue was excellent, the sound impressively balanced and clear for an outdoor venue (maybe Somerset House is blessed with especially good acoustics and chosen for that reason). 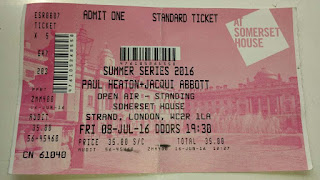 Heaton and Abott and their band had been hugely enjoyable (much better than they'd seemed at Glastonbury, I thought, perhaps they enjoyed the smaller crowd?) and I will definitely be back to see other acts at Somerset House if I get the chance! 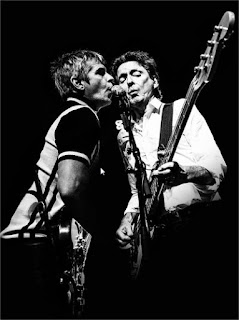 For a moment I felt like the student I could have been...

I was standing in the Guildford University Student Union bar listening to a "Town Called Malice" being played at 10 to the dozen (that's an odd phrase, isn't it? Suggest LESS than you'd expect rather than more!) amongst a load of people about the same age.

Up on stage were Bruce Foxton and a moodily handsome, but sulky fellow performer giving their all.

The people around me were rather old, weren't they and now I think about it, scissor kick or not, Bruce Foxton was looking a little older too...

And whilst there's something VERY Weller-esque about the lead singer, he's got grey hair and he's really not as sulky as Paul Weller and... I never WAS a student...

No, well into my 50s, I'd joined a group of, mostly dedicated, Jam fans to see "From The Jam", the name Bruce Foxton and Russell Hastings (not Weller, after all) perform under, in aid of "Wake Up Woking" at the Student Union at Guildford University.

There were a couple of support bands, the first presumably students, but OK, and the second lot I suspect I should have known, but I didn't, as they were very competent, but well into their late 50s and 60s on the whole.

Of course, like everyone else I was there to see Foxton 'from the Jam' (I guess he got fed up with saying "I'm Bruce Foxton from the Jam") and when they blasted straight into "A Town Called Malice" (probably my favourite Jam track) it was clear that the reports I'd heard of them being a great night out were true.

The pace was frenetic and unrelenting throughout. Foxton's looking quite old these days (Hell, we all are!), if I'm honest, but he had seemingly undimmed energy up on stage, even throwing in a few of those trademark scissor kicks.

Hastings is a great foil, looking a lot like Weller, but never straying into pastiche, he offers something a little different, but, whilst for some not the 'real' thing I'm sure, none the worse for that for me.

The drummer, no longer the original Jam drummer (allegedly upset at Foxton's latter day reconciliation with Weller, but who knows?), played his part faultlessly and the energy was infectious and intoxicating.

Through, "David Watts", "Smithers Jones", "When You're Young" and "Start!" they hammered on, I'm sure never sounding any better in their youthful heyday.

A few solo Foxton numbers are included, too and warmly received, but not as deliriously as the "Jam" hits.

To everyone's enjoyment the main set finishes with "Eton Rifles", seemingly more apt today than it was when current!

There's a few moments pause whilst the crowd demand the inevitable encore and they're back with "Down in the Tube Station at Midnight", "In the City" and end on "Going Underground", leaving those 'going home' happy, ears ringing and recalling when they were university age...

Setlist (From an earlier gig on the same tour, but the same, I think)

Town Called Malice
To Be Someone (Didn't We Have a Nice Time)
David Watts
Pretty Green
The Butterfly Collector
But I'm Different Now
Smithers-Jones
Boy About Town
When You're Young
Saturday's Kids
Now the Time Has Come
Picture and Diamonds
That's Entertainment
Liza Radley
Start!
Slow Down
Man in the Corner Shop
The Eton Rifles

Encore:
Down in the Tube Station at Midnight
In the City
Going Underground