My son had really enjoyed Milton Jones when we'd seen him at Basingstoke and wanted to go and see him again.

Due to his popularity, the closest we could get tickets was Salisbury (only about 40 miles away, so not too bad).

We arrived early, found the City Hall (not the impressive gothic structure you might imagine, but a bland 70s sports hall type building just off a street) and then had a quick meal in the nearby Weatherspoons.

On returning, we queued for the toilets and then made our way in to the hall, which looked even more like a sports hall. Our seats (in row J) were 'flat seating', but fortunately the view of the stage was pretty decent and we had no problem seeing and hearing the performance. There were rows of terraced seats further back, but they were some way from the front.

As at Basingstoke, "Milton's grandfather" appeared first (on a scooter!) and ran through a brief, but funny and highly Milton-esque, set.

He left and was replaced by James Adcaster, who was amusing, but not hilarious (other reviews I've read have been far harsher), although his final joke was almost worth the set on its own, I felt and then we got an intermission.

City Hall's facilities are pretty limited, so we didn't bother leaving our seats and fairly soon, everyone was back for Milton.

To his credit, none of the material seemed to have been reused from his previous tour and most was typical Milton, punny, funny and often very clever.

The joke about "Fernando" sticks in my mind, but as always they came at you like bullets from a Gatling gun, so not all hit hard enough to register before the next arrived.

There was a slightly odd interaction at the end where Milton picked up some items off the stage and read a letter from 'a member of the audience'. His response to it struck me as rather cruel and not very Milton Jones like at all. I'm unsure if this was a real letter or part of the show, but it didn't strike me as funny at all and was either misjudged or just a bit nasty, depending on which it was. 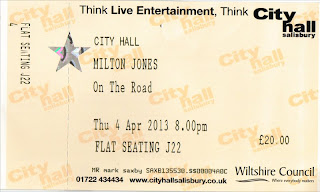 Overall, though, Milton Jones delivered another impressive performance, although I have to say (even ignoring the letter incident) I wasn't quite as enthusiastic at the end as I had been at Basingstoke, maybe there's only so much of relentless one liners I can take.

Ryan, my son, really enjoyed it though as did most of the audience, it seemed, and I would certainly go and see Milton Jones again, but maybe I'd leave it a few years next time. 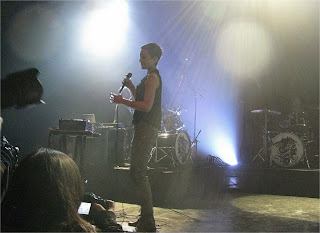 Having seen Polica perform a track on Later With Jools Holland, I'd bought their album and when I found out they were performing live at Shepherd's Bush (a favourite venue of mine) I got myself and my daughter a couple of tickets.

I was intrigued to see how they delivered the unique sound of the album (produced partly through a distinctly non-Cowellesque use of the Autotune).

We turned up early and had a quick drink in the pub next door before using my O2 phone to jump the queue (worth getting a PAYG sim in an old phone just for that :D).

First up, about 8 was Barbarosa, who looked worringly like a grunge duo, but produced an interesting (and highly complimentary) performance, I especially enjoyed the Terrence Trent D'Arby cover (as did my daughter as Wishing Well was a song we often played in the car when she was young).

After the near obligatory hour's delay and the venue feeling almost to bursting point, Darkstar appeared.

The lineup consisted of the singer, Channy Leaneagh, two drummers (their USP) and a guitarist.

If I'm honest I thought they took a little time to hit their stride and Channy Leaneagh seemed to agree, apologising (far too much, I thought) for their performance.

They opened with the awesome Darkstar, a bizarre choice, I thought, especially as the lacklustre performance meant it seemed to come and go almost unnoticed.

However, as the evening progressed, they seemed to warm up. Channy was constantly, it seemed, unhappy with something as she continually fiddled with settings on the (I presume) Autotune, but the confidence of their performance seem to build and by about half way they were nailing it. 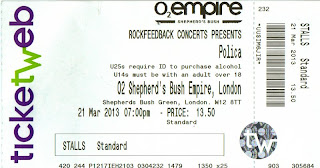 The set was pretty much the first album, with a couple of new, but very similar, tracks.

The effective use of two drummers was great really driving the beats through your body.

Channy's performance was impressive too after a faltering start. I heard someone leaving saying "She really hit every note", to which someone replied "Yeah, but she could have missed every word".

It's true, Polica is a sound and a feeling (My daughter said it was like a Pulse, the way the drums impact you) rather than lyrics you can relate to (or even hear, live especially).

Enjoyable by the end, but a little unsteady at the start, would be my summary.

I would certainly say they were worth seeing though.