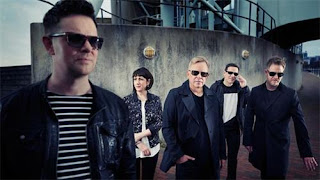 Last time I was here was to see New Order for the first time, despite being a fan since their earliest days, and I thought it would be the last time for both venue and band.

I wasn't a huge fan of Brixton Academy (I much prefer Shepherd's Bush) and I figured New Order probably wouldn't tour again, but after releasing a brand new studio album, Music Complete, to some considerable acclaim, they were back on tour.

When the tickets were released, I decided I'd give it a miss. I'd seen them and enjoyed the gig and I wasn't sure it'd be as good a second time around, but finally my resolve weakened, when a second date was added, and I bought a ticket.

After a support act, whose name I never heard, but actually sounded (amidst the usual awful support act sound - The singer being almost inaudible for the first 3 songs) quite interesting - I shall have to find out who they were - New Order, unlike last time, were pretty promptly on stage at 9:10 (I remember feeling - and reporting - that I felt they'd left their arrival a little TOO long last time), suggesting they were either keen to get going or desparate to get it over with, thankfully it proved to be the former!

The last tour had very much been a retrospective, showing off their extensive, influential back catalogue and proving, for any doubters, that New Order without Hooky were still capable of putting on a great performance.

What this show had was an energy, excitement and even innovation that had been lacking on the previous tour. A reviewer elsewhere said "At long last, they seemed to be enjoying themselves" and that's exactly what it felt like.

Of the original members, Bernard ('Barney'), Stephen and Gillian (returned for the last tour) remain, but the new-ish members fit in well, Tom Chapman on bass taking on the unenviable task of doing Peter Hook's bits with confidence.

In fact, enthusiasm and confidence were the key elements of this show.

The band were enjoying their performance and the enjoyment made it better, of course that meant the crowd were having a great time and even the new tracks were greeted with enthusiasm.

They started with Singularity, the current single, and then rewarded the audience with Ceremony and then a particularly impressive performance of Crystal, which stood out as easily a match for earlier, better known tracks 586 followed, with Restless (from the new album), Lonesome Tonight and Your Silent Face.

Elly Jackson, from La Roux, then joined the band on stage for a couple of tracks and was warmly welcomed and applauded - I like La Roux and think her involvement on Music Complete, and on stage, added a welcome vocal variety.

The main performance continued through Bizarre Love Triangle, Waiting for the Sirens' Call and Plastic (again from Music Complete) and then rounded out with The Perfect Kiss, True Faith and Temptation.

As all bands do, they came back a few moments later for the inevitable encore, giving us two Joy Divisons songs, Atmosphere and Love Will Tear Us Apart (a better rendition than the previous concert) and then rounded off with "Just one more", Blue Monday, which whilst it was a good finale and performed well, I still don't entirely think works as a live performance, maybe I've just listened to it too many times!

Overall, though, I came away thinking this was one of the very best concerts I'd been to. I'd said much the same about the last New Order gig and that was true at the time, but I suspect partly because it was the culmination of an ambition I never realised I had.

This performance was much more exciting and enjoyable, I thought, worthy of a new young band rather than a band retreading old material.

As "Storm Barney" blew across the UK, Barney (and the rest of New Order) gave us a storming performance that will remain impressed on my memory for years to come!

Judging from the audience's (of impressively varied ages, it was probably 50-50 20 somethings and 40-50 somethings) response most people felt the same!