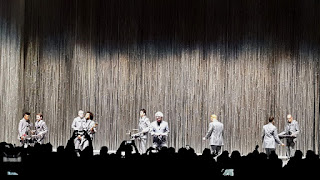 People sometimes ask me what the best gig I ever saw was and I never know what to say...

The memory plays tricks over 40 years of gigs. I can recall ones which exceeded expectation (Suzie and the Banshees at Poole Arts Centre in 1981, Franz Ferdinand in Bournemouth in 2009, New Order at Brixton in 2015, The Beat at Sub89 in Reading in 2015, too) and a few which disappointed (Bob Dylan, massively, a few years ago. Madness and Spandau Ballet, somewhat, in the 1980s), but mostly I've enjoyed them and so it's always seemed hard to say that any one was 'the best'.

I've always liked David Byrne from his Talking Heads days (A couple of TH albums in my LP collection - and a later solo CD - testimony to that, as I've not yet boarded the vinyl revival train, so they're all from the late '70s to early '90s), but I wouldn't call myself a diehard fan, but he doesn't tour often and for a few years now, since starting to go to gigs again, I've definitely had him on my radar, so it was with some pleasure that I bought myself a ticket to see his "American Utopia" tour at Hammersmith.

I'd heard, and liked, the new album and seen his assertion that this tour was going to be his 'most ambitious since Stop Making Sense' (The film of which I have somewhere on DVD and the CD, too, and think is a pretty amazing piece of work), but that seemed a mighty claim for a man now in his mid '60s.

Still, he's never dull, as more recent stuff like "Lazy" and the latest album proved, so I figured it'd be an entertaining enough evening.

I arrived early and queued for about 20 minutes before getting in.

The support act was Laura Mvula, who seems to have a good reputation, but I'm afraid her performance left me unimpressed, but, as so often seems to be the case, the sound for her set was dreadful, so I'll just have to say the guy on stage with her, Troy someone, was a pretty impressive drummer.

Hammersmith Apollo (I'd not been before) has a surprisingly low stage, with a floor that is flat for about 20 metres and then slopes up towards the doors to the lobby, overhead is an area of seating, but who wants to sit when you can dance?

As Laura left, the stage hands moved away her equipment and untangled a curtain of fine chains around the stage, leaving a wide open area with nothing, but a small table and a lone chair in the middle. A large brain sat on the table...

At about 8:45, the lights went out and then a spotlight illuminated a steel grey suited David Byrne in the chair, contemplating the brain and it began.

The first song was 'Here' from American Utopia, which is a fairly slow, melancholy song, and as it progressed he was joined by similarly dressed singers and musicians, the latter who were all carrying their instruments, no impressive, fixed drumkits or banks of synths, there were 4 or 5 people carrying a single percussion instrument (In fact, during an encore EVERYONE had a drum!).

The minimalist set was impressively lit, given lie to the fact that you need loads of lazers, lights and pyrotechnics to make an impressive set. The chain curtain let his fellow performers swim in and out of the stage. It sounds a little silly, but the effect was rather magical and I was just simply mesmerised - I think I could have watched the performance with no sound and enjoyed it immensely!

Fortunately, that wasn't required and David moved swiftly into one of the many songs from his back catalogue that he included, starting with the recent-ish 'Lazy', which changed the pace, invigorated the band and snapped the audience into another frame of mind.

'I, Zimbra' and 'Slippery People' from the Talking Heads period, followed and, if anyone in the audience was wavering (aside from the man near me who never seemed to so much as tap a toe!), got them firmly into the mood for a great time.

The response to most songs (especially the better known ones, such as 'This Must Be The Place' and 'Once in a Lifetime') was rapturous, more akin to that you experience at the end of a gig, but this was after nearly every song! 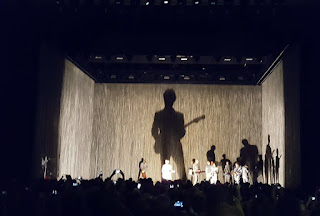 'Everybody's Coming to My House', his most recent single, stood up well amongst the classics, but there were some songs in there I was less familiar with, but all the better for it.

'Burning Down The House' was the main set finale and nearly bought the house down, but, of course, everyone does an encore these days, and we got 'Dancing Together' and 'The Great Curve' (A Talking Heads song which I didn't know, but was truly magnificent!) and then a second encore, which was 'Hell You Talmbout', a Janelle Monáe song that lists Black Americans killed by the police. Somehow, I suspect it has more resonance in the States as, to be honest, most of the names meant nothing to me, so the odd few that were familiar stood out.

Personally, I think that might have been a bit of a miscue, but in a way it was a perfect ending, as the whole team were lined up, drums in hand, taking an equal part in the performance. Yes, we'd come to see David Byrne, but there was no doubt that everyone on the stage played their part.

If I had any complaint, I might say a few of my favourite TH songs (and "Gasoline and Dirty Shirts", my favourite from American Utopia) were missing, but this isn't an artist doing a 'greatest hits' tour (or a reprise of the 'Stop Making Sense' tour, much as I suspect most would have loved that), so the fact that back catalogue material was liberally sprinkled amongst the new stuff was to be enjoyed, not moaned about.

At one point, David made a remark that a friend had asked him if the performers were miming earlier in the tour., but, no, he said, everything we heard was coming live off the stage, by the performers there.

However you look at it (And you can find plenty of videos of the tour online - I was glad I hadn't bothered to check them first though, as I suspect some of the impact would have been lessened), it was a remarkable performance.

The presentation, choreography and lighting were imaginative, even breathtaking at times and the sound and, indeed, David Byrne's voice, were excellent.

Maybe I'll feel different in 6 months or a year's time, but I think I've just seen the best gig I've ever been to!

After writing this, and a month later still mesmerised by this gig (I was looking to see if a DVD was going to be available of this tour at all), I found this NME article, which pretty much agrees with what I tried to say, but says it more eloquently!

Encore:
Dancing Together
The Great Curve