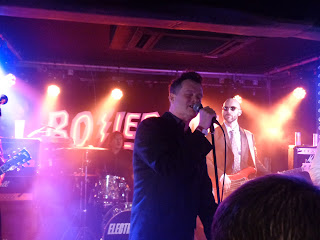 This one came out of the blue!

I'd seen Electric Six in Reading 3 years before and, even though I'd quite enjoyed myself, wasn't sure I would again, but I saw this gig advertised when seeing Ren Harvieu and being so local and cheap, decided I'd go along.

Google was showing them as playing in Holland on this date and few of the ticket sellers' sites were showing this event, so I can only assume that the Dutch event was cancelled and the Boileroom gig added at short notice.

However, the late announcement didn't stop people coming from far and wide to see Electric Six and The Boiler Room was packed in a way I hadn't seen since my visit to see The Hoosiers some years ago.

The support band was a Guildford Band, Neon Islands, but to be honest, the sound was so bad for them (combined with most people chatting while they played, further muddling the sound) that it was hard to tell if they were good or not. 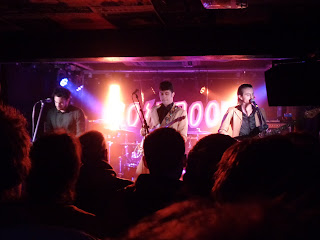 Electric Six came on around 9:30PM and featured a similar lineup to that I'd seen in Reading, back in 2018 and they had a lot less space to play with on The Boiler Room's tiny stage, but one thing they are never short of is energy.

I'd ended up right near the front for the start of their performance, with a group of 30 something male friends and a couple from Detroit, the woman of which said (and I've no reason to doubt her) that Jimmy, the drummer, was a relative.

The lineup was, of course, fronted by Dick Valentine, the only Fire period member remaining, but a couple of the other guitarists also looked familiar.

Dick thanked us for coming on such short notice and joked about being desparate to sell us some of the many albums they'd made and as he went along there was a running joke about each track being off "one of the albums".

I have to admit, most of my familiarity with their material comes from the debut album, "Fire", which features "Improper Dancing", "Gay Bar", "Danger, High Voltage!","She's White","Synthesiser" and "Naked Pictures (Of Your Mother)", all of which featured in the setlist, scattered amongst other tracks from later albums, including the openers from the latest album, "Bride Of The Devil" and the earlier "Switzerland".

There's a relentlessness to their playing and to Dick's vocals, occassionally broken on tracks like the mellow "Syntheiser", and that was there in abundance, but I also appreciated their musicality on this ocassion, many of the lesser known tracks showing off the band's talents.

On introducing "Rock and Roll Evacuation", Dick joked that it was written in response to George W Bush's election "When it seemed like the worst thing that could happen to America" and then smiled and said "And then something else happened", leaving the audience in no doubt of who that was.

The set, with the encore ("Dance Commander"), lasted about 90 minutes and I went back to the bar about 2/3rds way through as I needed a glass of water from too much dancing and the general crush. It's all one space though, so I was still in the room where they were performing, but not in the melee at the front any more. 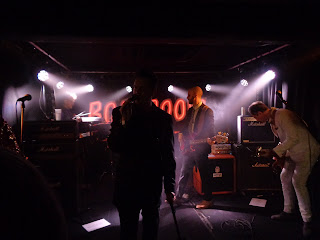 It was, to say the least, a lively, exciting gig with the band seeming to be enjoying themselves too.

"Gay Bar" was, oddly, played in two short sections, which I didn't remember from Reading, but from the set lists I've found online, it seems common these days, at least. It was still enjoyable and did give us the pleasure of the intro twice, which is a definite highlight.

"Improper Dancing" is probably my favourite track and that had a great rendition, combined with "(Who The Hell Just) Call My Phone".

Of the tracks I was less familiar with, "Rock and Roll Evacuation", "Dance Epidemic", "I Buy The Drugs" and "Slices Of You" have stuck in my mind the following day, but everything was delivered (and received) with the same enthusiasm and energy. 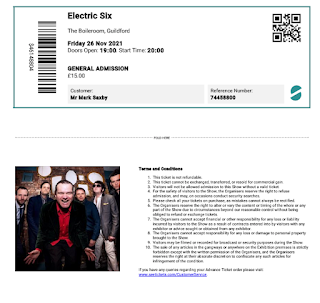 The feeling I'd had at Reading was that their tracks get a bit samey after a while and I have to say that I had the same feeling to a degree this time as well, but I definitely enjoyed this gig more than the Reading one.

Somehow the band seemed more relaxed, Dick Valentine looked healthier and they seemed be enjoying themselves more, but maybe I'm just projecting my own feelings.

Either way, it was a fun night and, with the postponement of French band's, Keep Dancing Inc, gig until next May (as COVID continues to play havoc with normal life - As I correct a couple of typos a few days later, we have new restrictions coming into place!), a great way to almost certainly end my 2021 gig going.

Electric Six are definitely a band that knows how to deliver a good night out! Thanks guys. 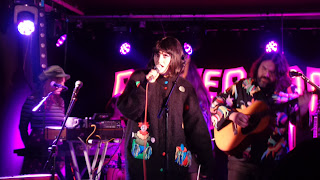 As the winter nights drew in, I found myself wanting a bit more entertainment

After a highly enjoyable evening at The Boileroom with Goan Dogs and their support, I scanned the upcoming dates there again and spotted Ren Harvieu was playing on the 16th November.

As is often the way, the name meant nothing to me, but a quick Google revealed a woman with an impressively good voice, so I booked a ticket.

I was more than a little miffed to find Guildford council had changed the parking to mean I was £4 out of pocket just to park, but I decided I'd ty not to let that spoil the evening.

There was virtually no-one in the Boileroom when I arrived and the tall man in the stripey trousers turned out (not unexpectedly) to be one of the support acts!

There were two billed support acts, but both actually turned out to be members of Ren Harvieu's band.

The first, Felix Holt, sat at the side of the stage at what could well have been a Hammond Organ, which seemed to intermittently play one note and then be changed a bit later to another. I'm pretty sure his whole set consisted of just two songs, the first, a dirge sang in a Bob Dylan style and lasting at least 10 minutes. The second was marginally more tuneful and melodic, but he defintely wasn't the best support act I've seen this year!

Next up was the lanky, stripey trouser clad singer, Robert Chaney, who was more conventional and definitely more enjoyable, playing a guitar and singing. Again, as a solo act, he wasn't great, but I'd been a bit spoilt by the Goan Dogs' support acts - He wasn't terrible. 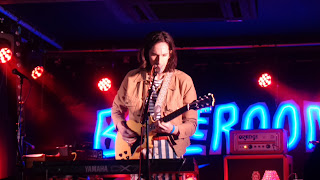 At around 9PM, Felix and Robert, a cap wearing woman, a man it what looked like a terrible grey wig (I really hope it was a wig!) and two familiar looking people took the stage, followed shortly by Ren herself.

The familiar pair were Romeo and Michelle Stodart from The Magic Numbers - Not a band I'm a particular fan of, but I was aware of them and recognised them. Indeed I'm pretty sure Michelle supported Ben Watt when I saw him at the Boileroom, but looking back I didn't mention who the support was. I do recall, though, that she was pretty good and I was impressed to see Ren had got them onboard (It turned out that Romeo was, to a great extent, involved in her return to recording and touring, so he deserves thanks for that!)

Sadly, the venue was still poorly attended with less than 50 people present.

While it must have been disappointing for Ren and her band, they didn't let it show, putting on a quirky, entertaining show which was a mix of tracks from her latest album ('Revel In The Drama' - Self described as her 'second debut album') and her successful first album ('Through The Night').

The band were great, with particular credit going to the be-hatted woman who put in a virtuso display playing keyboards, violin and even a saw at one point and harmonising brilliantly with Ren on some songs. 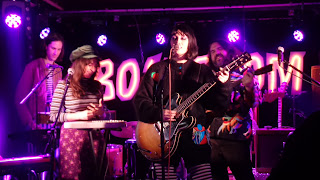 However, the undeniable highlight was Ren's voice.

Why she isn't a huge superstar is difficult to understand to me. Her voice is so flexible, strong and clear, never jarring but capable of a great range. As she explained the history of 'Salford Superstar', she joked about children who sprang from the womb trained by Maria Carey, but her voice, while beautiful and wide ranging, never strays into the gimmicky histrionics of MC (a singer who always sounds like a cat in a tumble dryer to me...).

They kicked off with 'Teenage Mascara','Strange Things' and 'This Is How You Make Me Feel' from the new album, followed by a song called 'Soft' (a great song, but not listed on either album) and then 'Through The Night' and 'Do Right By Me', singles from the debut album.

'Is It Love','Dramatic Nonchalance' and 'Salford Superstar' don't appear on either album, but were highly enjoyable, while 'Yes Please', 'Curves and Swerves' (combined with 'A Wow and A Whizz' in what Ren described as a 'megamix') and 'Open Up Your Arms' were taken from the two albums.

Oddly the finale 'The Wonder Of It All', featuring the saw playing, felt a bit of an anti-climax and, sadly, there was no encore (in my experience, it's a rare thing at the Boileroom).

Personally, I'd have loved to hear her cover of 'Something', which is on YouTube, live as an encore.

Between tracks she chatted and seemed a very personable woman. Her long hiatus was, at least partly, due to a spine breaking accident between the recording and release of her first accident, and she talked about that (a little) and how she came to singing as a child.

A couple of times Ren observed that we were a small audience (hardly our fault), but that she hoped to see us again next year with the release of another album. 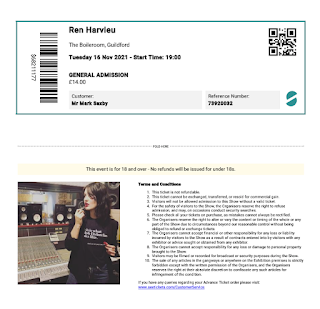 I really hope she does come back and that a bigger audience are drawn to her music.

If Ren Harvieu returns, I'll be there - I have to say, she probably has the most wonderful voice I've heard live.

PS Apologies for the terrible photos - I got a different camera and now realise I had it set on the lowest setting!