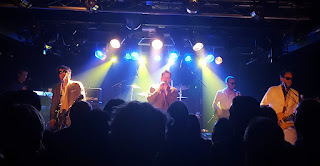 I'd heard a couple of albums, so my knowledge went a bit further, but I figured they were worth a few quid for a trip to nearby Reading one mid week evening.

The only time I'd been to the small Sub 89 venue before was to see the Beat, but I remembered it being a good venue where I'd really enjoyed the band.

I didn't rush, but being only about 30 minutes drive from home, I was there for the support band (whose name I was sure I'd remember, but I can't now - It was something pompously heavy metal like "The Last Testament of Garth", but not quite that).

Now, everyone has different tastes, but these were probably the support act I've enjoyed the least ever - It was just noise to me, although some people clearly enjoyed it.

At about 8:45 another group appeared. With a shirtless, heavily tattooed guitarist, a female guitarist, a bloke on a synthesiser and a lead singer who looked like a cross between Paul Calf and Frank from Shameless. As their set progressed, the singer leapt from the stage and stalked through the audience looking like a menacing Freddie Mercury. 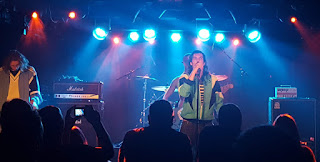 Musically, I think they were OK in a slightly retro-80s way, but it was the singer's behaviour that sticks in the mind - Undoubtedly the most unusual support act I've ever seen, but despite the rather unsettling manner of the singer, the crowd (me included) loved them and they got a rapturous send off, leaving us with the question "Are you ready for Electric 6?"- After that, I think we'd been suitably warmed up for anyone!

Electric 6, by contrast, ambled onto the stage (such as it is) nonchalantly (and looking, a bit like me, rather middle aged) and took their places.

The lead singer, Dick Valentine (the sole member from the Fire days), thanked us for coming and told us that their 14th album was just out (or out soon), which surprised me (A quick Google reveals that they've made an album nearly every year since 2005!).

I can't remember the set order or most of the songs to be honest.

There were a few in there I recognised from the first couple of albums (Including 'Naked Pictures', 'Improper Dancing' and 'Syntheziser'), but basically they were just a lively, fun rock and roll band.

At one point Dick Valentine remarked that they'd played the (much larger) Hexagon 13 years before (which must have seemed a bit of a come down), but that they were glad to still be working in the 'dirty business' of gigging.

Of course, the absolute highlights were "Danger! High Voltage" and "Gay Bar" (the opening bars of which would crown any bands repertoire) and the crowd (a mix of students - either heading back to Uni elsewhere or back in Reading for the next Uni year - and older people who remembered the band from their heyday at the turn of the century) went suitably wild for both.

Electric 6 are enjoyable enough and I left, ears ringing for some hours after, happy enough with my modest investment in gig - I doubt I'd go to see them again, if I'm honest, but not because they weren't entertaining, just because I feel (for me) once was probably enough.

That said, I'm glad I've heard those opening bars to "Gay Bar" live once! Maybe, that's worth the time to see them again alone!