I've always liked Sheryl Crow, but doubted I'd ever see her perform live. 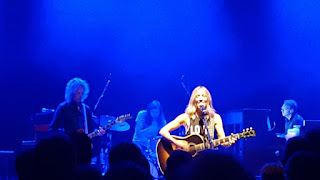 She'd been on my 'gig alert' from SeeTickets (and others) for years, but never showed up, so I did a bit of a double take when I saw it pop up, but sure enough, Sheryl Crow at Shepherds Bush (a favourite venue of mine) and, it turned out, one of only two shows in the UK!

I was poised over my keyboard as the tickets went on sale and soon had mine.

I'm not sure if it was because it was a Friday, but the drive to Shepherds Bush was busier than I'd experienced before and Westfield's carpark was chaos as they build yet more shops there, but I arrived (after grabbing a quick KFC) about 8:15, half way through the support act, a bloke who performed rather mournful, dirdgy songs, which left me wonder if perhaps Ms Crow was going to give a similarly downbeat performance.

Luckily (as the support act did nothing for me, although he was warmly applauded, so I guess some liked him), I needn't have worried.

At 8:45 a very youthful looking Sheryl Crow (she's my age, but, if I'm honest, she looks better!) and her band appeared and dived straight into 4 old favourites, Everyday Is a Winding Road, A Change Would Do You Good, All I Wanna Do (my all time favourite) and My Favourite Mistake - I was left wondering whether she'd performed the setlist backwards... surely these were encore material?!

Some new tracks followed, Be Myself (the title track from her new album she was in the UK to promote) and others certainly feeling like lost tracks from her earliest albums and being warmly received by everyone.

Can't Cry Anymore and The First Cut Is The Deepest (A track I always associate with Rod Stewart!) followed from her back catalogue, then some more new material and There Goes The Neighbourhood, Leaving Las Vegas and Strong Enough, before a few new, but familiar sounding, tracks and then the crowd sang their hearts out to If It Makes You Happy and they finished on a boisterous rendition of Soak Up The Sun.

The inevitable, but short, encore (right up to the 11PM curfew) was Run, Baby, Run and I Shall Believe. 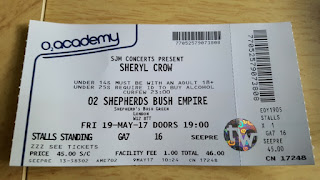 I'd wondered if maybe Sheryl Crow had grown introspective and a bit ballardy in later years, eschewing the energy and fun of live performance, but there was no sign of that at Shepherds Bush.

She and her band, many of who she said have played, on and off at least, with her for years, seemed to be having a whale of a time and the Empire was packed (as busy as I've experienced it - Again, maybe a Friday night brought out some who won't do a midweek show) with people from their 20s to their 60s, suggesting Sheryl Crow still has a wide appeal (a youngish woman in front of me knew all the words to every track!).

It had been a highly crowd pleasing performance and a rare and welcome chance to see and hear her live.

Getting out of Westfield and around the Green was chaotic, so it took me 90 minutes to get home. I will probably think twice about going to another gig there on a Friday, unless it's someone I really want to see, but Sheryl Crow had been worth the hassle.