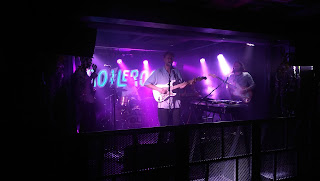 I'd been to see the Goan Dogs just before lockdown in 2020 and enjoyed it, so when I saw they were coming back I bought a ticket.

This time it was a cold Monday evening, when I turned up and, as before, there weren't many people there.

On this occasion there were two support acts, Worm Immortality Team and Pattern Pusher, and the first were soon on.

A few more people had arrived by then and a group of rather nerdy looking teenagers arrived and started playing - Initially they didn't look too promising, but then a waif-like girl appeared and started singing.

Musically, they were OK, but the girl's performance was quite interesting, lifting them to something worth listening to.

They got a good reaction from the audience and got a rousing applause when they finished. It was nice, too, to see them in the audience for the Goan Dogs later on!

Pattern Pusher were a three piece, self-described as an 'odd pop trio', with a lively bassist (who was even in the audience at one point!), a drummer and the lead singer who also played keyboards.

They had a more polished sound than the Worm Immortality Team and a more polished performance working through a cheerful, dancey set of tracks and certainly got the audience moving even more than 'the Team' had.

Maybe they could be accused of being a bit middle of the road, but the sound was pleasant and catchy and their performance was professional.

So two great support acts to get us started, the bar was pretty high! (Well the prices were at £6 a pint! But as my ticket had cost me about a tenner I was more than happy with the cost of the evening so far and the main act hadn't even played yet!).

And so to the Goan Dogs.

Since I'd last seen them I understand they'd got some radio play and while the small venue wasn't packed, there was certainly more people than 2020 and most people knew who they'd come to see, at least had heard their single on the radio.

Most of their songs tonight were taken from their recently released debut album and the tracks I knew were mostly absent, which was a bit of a shame as some of those were excellent.

Once again, they were very good live. I still can't really classify their sound, but it certainly felt, on this ocassion to have taken a slightly improvised, jazzy direction, which probably wasn't as catchy as older tracks, but certainly worked well in a live setting. 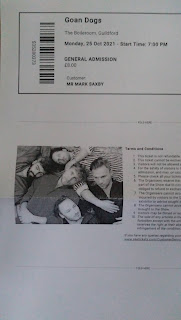 There was a lot of dancing, clapping and foot-tapping going on by the end of their set and the whole evening seemed almost absurdly good value when you consider the eye-watering prices some big acts charge to see them.

Bang for the buck, Worm Immortality Team, Pattern Pusher and the Goan Dogs blow Coldplay or Adele out of the water and I'm pretty sure I wouldn't have enjoyed a cold Monday with either of them half as much! 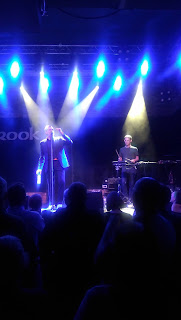 It'd been a long time coming

I can't remember exactly when I'd booked my ticket to go and see Blancmange (Now Neil Arthur and a couple of musicians), but the event was first scheduled for 24th October 2020, a leisurely Saturday evening.

With all the COVID chaos of the last 2 years, though (which had meant my last live music event was February 2020), it was rescheduled twice and here I was on a Wednesday in 2021.

The drive down the M3 was easy enough and I arrived in time to see Finlay Shakespeare, the support act, take the stage.

I can see why his music might seem a good match to a Blancmange audience, but he definitely didn't 'float my boat' - With a strong electronic backing he just seemed to shout his lyrics and get increasingly sweaty.

To be fair, some of the music was quite good, but his delivery was decidedly off-putting. If he cares, I'd suggest he might be better off to find a good vocalist and form a band.

He got polite applause, but I definitely wouldn't pay to see him, if I'm honest.

There was around a 30 minute hiatus while we waited for Blancmange and then two young musicians appeared to take up their places behind a synthesizer and a electronic drum kit.

Neil Arthur then appeared, looking fit and youthful (and remarkably like a friend of mine!) and launched into a rather John Cooper Clarke-like song about winning Crackerjack pencils. There were a couple of tracks like this in the setlist, odd, but not too distracting - I believe they were both from the latest album, but I'll admit I'm only really familiar with Blancmange's early material.

That early material was fairly represented with Waves, Living On The Ceiling, Feel Me, The Day Before You Came (sadly the keyboard level rather swamped Neil's voice on this one) and the encore, Don't Tell Me, all featuring.

With a lot of albums (most from the last 10 years), there was a lot of material I was unfamiliar with, but a lot was enjoyable, but I'd be lying if I said I didn't enjoy the early stuff the most. On this occasion, being on a nostalgia trip was fine with me, but the whole performance was upbeat and enjoyable.

I wasn't in the best frame of mind for an evening out, my mother having been admitted to hospital that morning, and I didn't know for sure when I set out if I'd attend (I found out she was staying in and I couldn't visit, on the way), but I had a good time and it was an enjoyable and welcome distraction.

Worth the price of the ticket, certainly, and it was great to be able to enjoy a live gig again - Next up, the Goan Dogs again!

Setlist (From Norwich, but I think it's right):
Game Above My Head
In Your Room
I Can't Explain
Mindset
What's Your Problem?
Clean Your House
Waves
I've Seen the Word
Not a Priority
What's the Time?
This A State
Last Night (I Dreamt I Had a Job)
The Day Before You Came(ABBA cover)
I Prefer Solitude(Fader cover)
Living on the Ceiling
Feel Me
Blind Vision
Encore:
Don't Tell Me