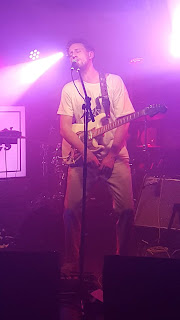 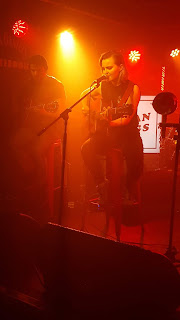 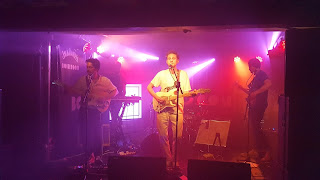 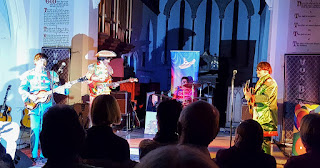 What can you say about The Beatles?

Undoubtedly one of the most loved and influential bands of the 20th century, but possibly one whose songs are so ingrained in popular culture that they're taken for granted or even rather disparaged by some in more recent generations.

The one thing you can say without any fear of dispute is that you'll never get to see them perform live! They, famously, gave up touring very early in their career (tired of no-one being able to hear them above the screaming of 10,000 girls and a few boys, no doubt) and, aside from the famous rooftop event at the very end of their career, they never wavered in that.

So that explains, to a great extent, why I was back at St John's Church in Farncombe on a freezing night in January.

Part of it was simply that I fancied a night out, the £16 entry fee seemed very reasonable and the reviews of The Vox Beatles (and some YouTube videos) suggested they were a decent Beatles tribute band. 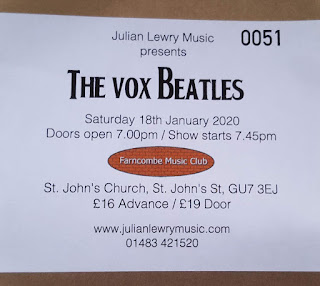 So, having quite enjoyed the Illegal Eagles a couple of years earlier, despite my doubts about tribute bands, I bought a ticket way back in April 2019 (I think I may even have been the very first person to do so!).

It was a frosty night even as I left home to drive the 15 miles or so to Farncombe village.

Once inside the Church Hall (which doubles as a bar for music events), I was surprised to see a long queue of people snaking from the door to the Church, obviously keen to get a good seat.

I could hear the band warming up at one point and they sounded pretty decent through the door and about 7:35 the door was opened and in we went.

One thing I had forgotten about St John's Church was that the pews are rock hard, once again you could spot the regulars, as they'd bought cushions with them! It was also fairly chilly, but not quite so much that you needed to keep your coat on, which was a relief.

Just before 8, the band appeared, dressed in the 'Cavern Style' leather jackets and black roll-neck sweaters. 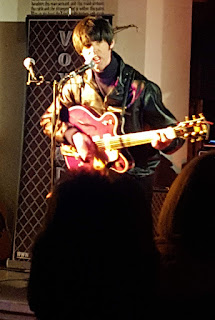 From the off it was apparent that, unlike the Illegal Eagles, The Vox Beatles were going to play the characters (John, Paul, George and Ringo) of the band, rather than stick strictly to the music.

The leader 'John' (actually Mike, I seem to recall), quipped Lennon-like throughout, while 'Paul' pulled funny faces (as is still his want) from time to time. 'George' was fairly low key, only 'Ringo', poorly illuminated and stuck behind his drums at the back, seemed unwilling or unable to play to character, although he did perform a few of 'Ringo's songs.

Initially, personally, I found this a little irritating, but after a while I accepted that it was part of the performance and it seemed less jarring as the evening wore on. Now and then, too, they'd drop out of character, which was funny and made it clear they weren't taking it all too seriously.

What helped, of course, was that when playing they were really good.

Both instrumentally and vocally, they produced a sound that was close enough to the original songs to be both enjoyable and memory-evoking.

Although I wasn't born until 1962, when The Beatles started to enjoy mass success, I'd been a big fan in the mid-1970s, before Punk and New Wave came along and stole my attention.

I'd never lost my liking for The Beatles, though, and still have a pretty big collection of their albums (on CD and Vinyl) which still get an airing from time to time, so I was familiar with all the songs they played and, while I wouldn't say they all sounded exactly like the recordings, they certainly sounded close enough for you to think this might have been how they'd have sounded live.

After a few of the rockier early period songs ("Hard Day's Night", "Help", "She Loves You","I Saw Her Standing There"and "I Want To Hold Your Hand", amongst others - I can't find a full setlist), they left for a few minutes and returned in Shea Stadium style outfits to perform later period songs, such as "Day Tripper", "Ticket To Ride" and "The Night Before". 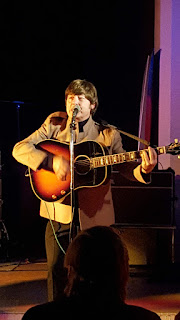 After about an hour, there was a 30 minute interval, while the (mostly pretty old - Older than me, even! - but there were some younger people and not all appeared to be carers!) audience pottered off for a beer, wine, tea or coffee and a much-needed comfort break (and by that I mean a chance to alleviate the buttocks from the solid pew seats!)

When we returned, the band appeared in "Sgt Pepper's" style costumes and started the second part with the opening two tracks from that album (The title track and "With a Little Help from My Friends"), later they came back to the album to perform "When I'm 64". 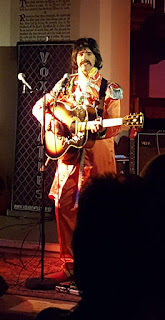 I'm a little hazy on the exact order, as they didn't play in strict chronological order, but we also had "Taxman", "All You Need is Love" and "Hello, Goodbye" around this point.

The guy performing as 'George' was excellent - They performed "While My Guitar Gently Weeps" and "Something" (as well as "Taxman") and his guitar work sounded impressive.

Around this point, the band split up, 'George' doing "Something" while the others changed and then he nipped off to return with a remarkably quickly grown (And very fake looking!) beard, to return in Apple Roof Top era outfits.

'Paul' gave us "Blackbird" and then, when the band were all back we got a selection of later songs, including "Get Back" (I couldn't help hearing The Rutles' "Get Up and Go" - RIP Neil Innes), the rather unexpected, but welcome "Ballad of John and Yoko" and the very unexpected, but a personal favourite of mine, "One after 909".

There was no encore, but they just kept asking if we wanted 'One more song'? And of course, the answer was yes. We got "Twist and Shout" and "Hey Jude" and in the end, it was only the 11PM curfew that stopped the fun. 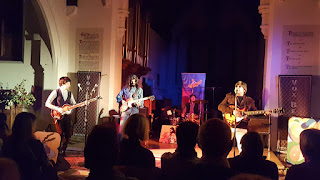 If you like the Beatles music and live performance, I can't think of any reason why you wouldn't enjoy an evening with The Vox Beatles.