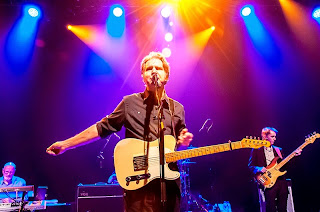 A lot of the music I listened to in the 80s was, I can now see, a bit rubbish,

but Lloyd Cole and the Commotions were most definitely not.

As the years roll by, I find myself listening to stuff I used to listen to with new ears and some gets the thumbs up, some new regard and some quietly filed under 'best forgotten'.

The first two Lloyd Cole and the Commotions albums were big favourites of mine and I've gone back to them many times over the years and never come away feeling they were anything other than quality music that continues to stand the test of time.

Oddly though, I lost touch with Lloyd Cole (musically) after the Commotions broke up and it was only an idle Googling moment that revealed he'd been busy in the intervening years.

Some online listening led me to discover he was playing Shepherds Bush (my favourite London venue) on 31st January and I booked a ticket well ahead.

When the evening rolled around, it was going to be hectic as I later booked a skiing holiday departing from Gatwick early the next morning, but after toying with the idea of trying to sell my ticket I drove up to Shepherds Bush and walked from Westfield to the O2.

I can't even remember now if there was a support act, which, if there was, is probably an indication of how memorable they were!

Cole's live performances (I'd discovered) in recent years tended to be acoustic solo affairs and it had been some years since he'd performed with a full band, so this tour was a new experience for many of the, many, hardcore Lloyd Cole fans there.

The venue was full and many of those around me clearly knew all the songs, whereas I was only familiar with about a half.

It started well, for all of us, with the iconic "Rattlesnakes", which was performed in rousing fashion, setting the tone for the evening (Lloyd's birthday it transpired).

Lloyds laconic voice ran through all the songs, but, on the whole, the Commotion era songs were faster tempo and more upbeat, the work of an angst young man, rather than the later songs, which echoed of experience some bitter, some sweet. It was no surprise that the mainly middle-aged audience were lapping it up.

Favourites, of course, for me were the Commotion songs, "Perfect Skin", "Lost Weekend", "Forest Fire" (the encore finale) and "Rattlesnakes", but "What's Wrong With This Picture?", "Myrtle & Rose", "Tried To Rock" and "Women's Studies" were unfamiliar to me, but stood out as great tracks.

Even with an early start the next day, to go Skiing in Wengen (I know, life's hard...), it was well worth making the trip to see Lloyd Cole at Shepherds Bush. The Commotion era tracks I knew were great and I came away with a much broader knowledge of his work and even a few new favourites (and a few weeks later, a few new CDs in my collection). 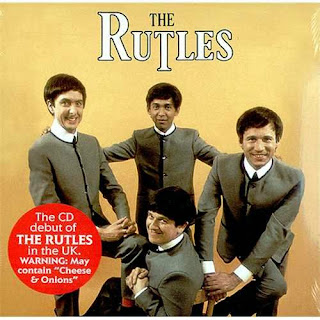 The Rutles was a spoof span out of Rutland Weekend TV, itself a spin-off of from Monty Python's Flying Circus.

What lifted it above a lot of music 'spoofs' was Neil Innes' (sometime of the Bonzo Dog Doo Dah Band and various other projects) remarkable gift for crafting songs which so closely resemble Beatles songs that you sometimes find yourself wondering if you're listening to a Beatles song or one of his.

At the time "The Rutles" was aired, I was a huge Beatles fan (even though I'm a generation too old to remember them in their heyday) and, such was the skill of the song writing and performing and clear affection for the originals, I loved "The Rutles".

I bought the album at the time and a few years ago I picked up a VHS copy of the TV programme, but I was amazed when I saw an email saying "The Rutles" were performing at Farnham Maltings as part of a small tour.

I was a bit sceptical at first, wondering if this was a 'tribute' band, but, no, Innes was front (along with the drummer, John Halsey - AKA Barry Wom) and centre of the project, so I snapped up a ticket.

The audience wasn't huge, although nearly all the seats at the back were taken (An indication of the average age there, I suspect), with a smattering of people standing at the front.

The band arrived and, if I'm honest, it really bought home how long ago The Rutles was, as Neil Innes is, dare I say it, quite portly and shaven headed these days, I expected the trim handsome chap I remembered.

Still, no matter, I was quite different back in the day too and as soon as they started playing the years rolled away.

They started with "We've Arrived" and then rattled through a good number of the tracks from the original TV programme/album and the later, possibly cleverer, Archaeology, which had been released to coincide with the Beatles "Anthology" TV series and album.

The band were all gifted musicians and Innes and Halsey introduced "Rutles" like humour to the event, with their "Sponsors' jingles" and banter.

As things went along, both the band and the audience seemed to warm up and some of the tracks were absolutely epic with "Piggy in the Middle" (Clearly 'inspired' by "I am the Walrus") being particularly good, but I struggle to think of a duffer either in the original material or the on-the-night performance.

Paul McCartney's certainly not this good any more!

Barry Wom (or "Wom.I.Am" as he apparently likes to be known now) also got to perform ("make Mouth noises", as Innes described it) his hits of "Living in Hope" and "Rendevous" (You'll know what they parody if you listen to them - and very well they do, too).

There was a short interval (none of us is getting any younger) following "Love Life" (another cracking performance) and then they returned to give us "Shangri-La", with it's very "Hey Jude like ending, where Innes asked us all to get out our mobile phones and wave them 'lighter like' ("no matter what the house rules, say!"), "Double Back Alley" and then a few "Rock 'n Roll" numbers from the "Hamburger Years", including "Goose Step Mama" with the immortal line "You've got nothing to eins, zwei, drei, fear".

They finished on "Get up and Go", the song, apparently, that Lennon thought was a 'little too close to the real thing' and didn't originally feature on the album (although not at Lennon's request, according to Neil Innes) which was a great track, but really is VERY close to "Get Back".

There was no pretence of leaving and coming back "It's all too exhausting", but Innes asked if we wanted one or two more songs and was cheered to the rafters (Farnham Maltings really has rafters!).

The 'encore' consisted of George Harrison's "All Things Must Pass" (following a touching tribute to the Beatle, who had helped the TV project considerable, getting talking heads like Mick Jagger and Paul Simon involved), Eine Kleine Middle Klasse Musik (very apt in Farnham) and finishing on the nostalgic "Back in '64", which was probably the perfect way to end a brilliant night. 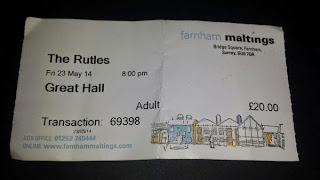 We'll never see the Beatles again and, I suspect, this tour may well be the Rutles swangsong (not least because Innes has so many other projects), but they certainly didn't go out with a whimper.

A great evening's entertainment - Thanks Dirk and Wom!

Setlist from Newcastle, but I'm pretty sure it's the same:

We've Arrived! (And to Prove It We're Here)
It's Looking Good
Hold My Hand
I Must Be in Love
Good Times Roll
Absurd Reductions At Fiasco
Cock A Doodle 'Tatoes
Four In One Hand Floss
Major Happy's Up and Coming Once Upon a Good Time Band
Rendezvous
Questionnaire
With a Girl Like You
Ouch!
Lonely-Phobia
Another Day
Piggy in the Middle
Living in Hope
Love Life

Encore:
All Things Must Pass (George Harrison cover)
Let's Be Natural
Back in '64