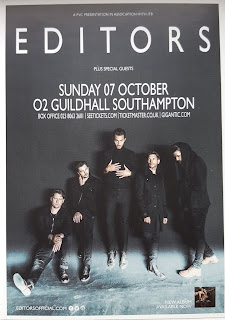 There are some bands that I like, but don't actively follow. Editors are definitely in that category

Some of their early stuff is reminiscent to me of New Order at their edgiest, which can only good in my books and, after thinking about seeing them a few times before, I bought tickets to see them at Southampton Guildhall, a venue that's not far from home, but I'd not visited before.

The hall is one large room, far smaller than somewhere like Brixton O2 or Alexandra Palace, but a lot bigger than the Academy O2 in Bournemouth or Sub89 in Reading. The only downside was, with a city centre location, that parking nearby seemed very expensive (£4.50 in a multi-storey - If I visit again, I'll try and find somewhere close, but cheaper in advance).

I was pretty near the front, arriving early, but by the time Editors appeared, it was packed (I believe it was sold out).

The support act, Talos, were surprisingly good, even having decent sound (far from usual) and got a good reception from the audience.

About 9PM Editors appeared on stage. 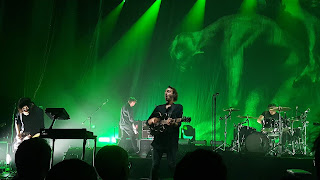 As I said, they're not a band I actively follow, so the tracks I knew were those from the first couple of albums, but I was pleased to find that a lot of the tracks I didn't know were pretty enjoyable, too.

The set was lit quite moodily, with a backdrop of the naked forms that feature on the cover of their most recent 'Violence' album.

Someone had commented on a forum I frequent that they 'weren't so keen on their newer stuff', but to be honest, I didn't find there to be a particularly marked difference in style, personally.

They were pretty good, I thought. Energetic and sounding good.

Around me, the hard core fans certainly knew all the words to all the songs, but even those unfamiliar to me (especially from the latest album) seemed to fit the overall set well, which featured at least one track from all of their studio albums (with more than a few from Back Room and An End Has a Start, probably their most popular, and first two, albums).

Unsurprisingly, they finished their de-rigeur encore with their biggest hit and best known track, Munich, which is still my favourite, too.

I left happy and humming, a good way to finish a weekend, especially as I only had a 30 minute drive home, rather than running for the last train as I often do with London gigs! 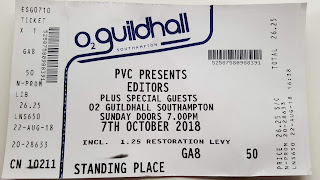 The Boxer (First time since 2010)
Sugar
Hallelujah (So Low)
All Sparks
An End Has a Start
Someone Says
Darkness at the Door
Fall
Violence
No Harm
Bullets
A Ton of Love
Nothingness
Ocean of Night
Blood
Papillon
Belong
Magazine
Encore:
Cold
The Racing Rats
Smokers Outside the Hospital Doors
Munich