I'd seen Glenn Tilbrook in the tiny West End Centre in Aldershot and greatly enjoyed the evening, where he'd chatted and taken requests from the audience!

I'm not an avowed Squeeze fan and I ummmed and ahhed for a while before buying a ticket to see him and Difford reunited as Squeeze at G-Live in Guildford.

I arrived a bit later than usual, so only caught the final half of the last song by support act, Nine Below Zero. The audience gave them a rousing ovation, though, so I guess most people had enjoyed them.

About 8:50, after the usual roadie/soundcheck shenanigans, the lights dimmed and Squeeze appeared on stage.

Their opener, "Please Be Upstanding" sounded like a song written to start a gig with, but was catchy and cheerful and soon got the audience on their side.

The next track, the classic "Pulling Mussels", had everyone singing along, although I have to say at times I found the large displays behind the stage distracted me from the actual performance on stage.

Some of the audience seemed to recognize all the songs, but I'll admit I only know their early stuff, so some passed me by.

The classics, though, were performed with enthusiasm and energy, and Tilbrook's voice still sounds good to me, although at times, down near the front and centre of the stage, the sound balance meant I couldn't make out all the words of the songs I didn't know (Someone's posted up some videos on Youtube from the balcony and it appears the sound was pretty good there!)

"Hourglass", "Cool For Cats" (with Chris Difford on vocals for a change), "Take Me I'm Yours" (A great performance with the drummers standing and playing marching drums (See the photo above), "Tempted", "Goodbye Girl", "Up the Junction" and "Labelled with Love" were all fantastic to my ears and reminded me of how clever lyrically Squeeze were/are.

They ended with a 3 song encore, finishing on "Is That Love" and, finally, a 15 minute rendition of "Black Coffee in Bed", that included a name check for all the band.

Well worth seeing and a quality performance by all, especially noteworthy, I thought, was the keyboard player.

All that said, I think I enjoyed the evening with Glenn Tilbrook more! 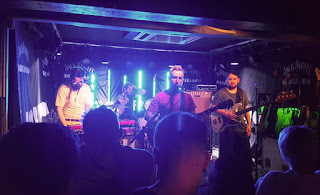 This was another of those double take moments...

In my regular 'upcoming Gig emails' I saw that The Hoosiers were playing at the Boilerroom in Guildford, where I'd seen Ben Watt play early in the year.

As it's tiny venue, I couldn't see how a full band could actually fit in, but some investigation confirmed that, yes, it was THE Hoosiers (And not just one of them!) and, yes, they were playing The Boilerroom as part of a small tour to celebrate the 10th Anniversary of their first album, the excellent "The Trick To Life", which was being re-released in a special edition (along with a first time vinyl release, how times change!).

I quickly bought a ticket, but still wondered what this would be like in the cramped venue.

When I arrived a support band were finishing (I recall there were two, but little about them, except that one had a very mannered lead singer who actually seemed to spoil a fairly decent set of musicians. I guess he'd call that charisma!

Eventually, about 9PM, by which time it was already pretty toasty and I'd sunk two pints of Asahi, The Hoosiers appeared on stage (which is really a little alcove at one end of the bar - This was one a pub and the layout isn't really that great for music, if I'm honest!)

They performed the whole of Trick To Life from end to end (as bands are wont to do when celebrating the anniversary of releases.

I must say, they were very good, looking and sounding very like they had in their heyday (not that long ago to be fair) and the songs sounded fresh and energetic,as they had then.

This was a band that both myself and Lauren and Ryan really liked and it was definitely more their age group that made up the audience. One group I spoke to agreed they were surprised to see them playing there, one lad saying "I couldn't believe it, there was my 14 year old self getting to see my favourite band!"

After they finished the tracks from Trick to Life, they played a number of other songs, which I didn't know, but the audience received enthusiastically and seemed very much of a similar style.

They even popped in a cover of "We didn't start the fire" by Billy Joel, which I did recognize!

The place was absolutely packed with 20 somethings (I reckon I was the oldest person there by 15 years, at least!) and it got very, very hot, but everyone seemed to have a good time, although I had to beat a retreat to nearer the bar towards the end to cool off (I found one or two people who'd been standing near me earlier had done the same though!).

A good evening, with a great performance by The Hoosiers, but perhaps they were just a bit too big a draw for the tiny Boileroom?

Encore:
The Feeling You Get When
Money to be Made
Somewhere In The Distance
Pristine
I Can't Feel My Face(The Weeknd cover)
We Didn't Start the Fire(Billy Joel cover)
Choices