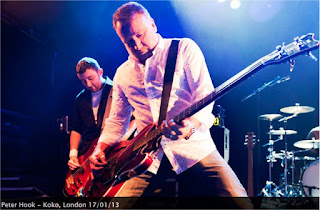 Well I'd been pretty impressed with their performance at Brixton Academy last year, but when I saw Hooky and his new band, 'The Light' were performing the first two New Order albums at Koko in Camden, I decided it would be interesting to go and see him at work.

Koko was the Camden Pally and is quite an attractive venue inside with lots of ornamentation, typical of a Victorian music hall, but with the usual collection of modernity a venue that is, presumably, more often a nightclub than a concert venue these days, judging by the layout.

Koko is easy to reach from Waterloo, straight up the Northern line, so I arrived about 7:15.

At 7:45, sharp, the support act, Modern Blonde, came on. I was a bit nonplussed by them. Perhaps they just suffered the usual support act curse of lousy sound balance, but they sounded pretty crap, to be honest. The audience was mutedly polite in response to their performance, which I guess gave them the benefit of the doubt.

After around 30 minutes of that and another 30 minutes, Peter Hook and the Light took the stage and launched straight into a number of tracks not on Movement, including In a Lonely Place, Ceremony and Procession , which was not a bad way to start at all.

They then rattled through Movement, an album which is often referred to as more of a Joy Division album than a New Order one and Hooky was certainly channelling Ian Curtis in his vocal performance, but then that's how the album was performed when recorded, so fair enough, and I'm not complaining one bit.

There aren't the same number of toe-tappers on Movement that there are on Power, Corruption and Lies and aside from the hard core right down the front, few people seemed to be moving much through the majority of the tracks.

I'd imagined most there would pretty familiar with New Order, but it almost felt that people were unfamiliar with the tracks as performed, although they sounded pretty much 'straight' to me, with few embellishments over the album versions.

Perhaps lots of people didn't discover New Order until Power, Corruption and Lies or a fair number of the audience were just out for a bit of mid-week entertainment. The venue was certainly full with the floor and the terraced levels above pretty jammed.

Eventually they reached the end of Movement and after a short break, mere moments really, they reappeared and started with Mesh, Cries and Whispers and the crowd pleasing Everything's Gone Green.

Then they were into Power, Corruption and Lies, which was clearly what most of the crowd were more familiar with and, let's face it, what most people think of as more typical of the New Order Sound.

From the opening bars of Age on Consent through to the soulfull last notes of Leave Me Alone, through the darkness of We All Stand, the poppy happiness of The Village, the Blue Monday-esque 586, the soaring ballad Your Silent Face, iconic Ultraviolence and near instrumental Ecstacy (which I always think of as "Moscow Gold"!) the performance was (as someone commented on Cardiff's 'try-out' event) 'tight', energetic and powerful.

According to a setlist I found online there was an encore, but the gap between Power, Corruption and Lies and the return was a 'blink and you missed it' gap, before they performed Hurt and Temptation (The setlist mentions "The Beach" first, but I don't recall this...).

They ended, almost bang on the 11PM curfew, with a rousing performance of Blue Monday.

This had been the one small disappointment (if you discount the rushed, Love Will Tear Us Apart) to me at Brixton when I'd seen 'the others' and Hooky's crew definitely had the edge here. The track was powerful, soaring and energetic - Everything I remember it being as a 20 something and not the rather sterile track that I'd heard at Brixton and it was the perfect way to end, although I did rather regret (see what I did there?) the chance for an encore featuring "Love..." as I feel sure that would have been brilliant.

Still, you can't feel short changed with 2+ hours of rip-roaring first class New Order and, even if Hooky didn't quite carry off the vocals the way Barney does, that's what we'd got. 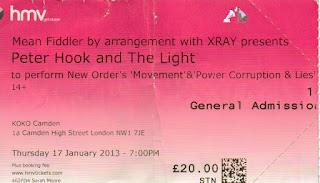 Is New Order, New Order without Hooky? Probably not quite, and The Light aren't New Order, but they are 100% worth going to see, this was quality "Whatever-genre-early-New-Order-is" and if you'd gone to see a new band called The Light and they performed an unknown set like this, you'd be telling your friends about it until your dying day!

Roll on Low Life and Brotherhood!