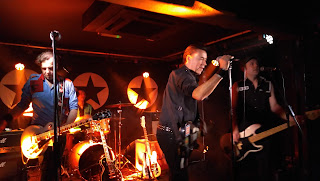 Could a tribute band do service to 'The Only Band That Matter'?

This was a weird one, I saw the lead singer of 'London Calling' on the TV quiz, Pointless, and bought a ticket while the programme was airing.

I'm a bit suspicious (maybe the right word is snobby?) about 'tribute' bands, but sadly The Clash couldn't reform if they wanted to and, heh, the ticket was a tenner and a few miles from home, hardly a loss.

I arrived about 8 and, despite the tail end of Storm Eunice bringing down trees left and right, there were already a fair number of people there, maybe being a Friday helped, but they continued to arrive as the evening progressed and, while not as busy as I've ever seen it, it was certainly a good crowd by the time the main act arrived.

Before that, as I arrived in fact, there was a support act whose name escapes me now, but were described (as I recall) as a 'contemporary Punk band, with influences old and new', but to be honest, to my ear, they sounded for the most part dreadful. The 'singer' and lead guitarist, too, acted liked hackneyed Punk stereotypes and what little I could determine of the lyrics fell into the same category.

A woman on a guitar (bass, maybe, I didn't pay a lot of attention for long) was suitably distracted and refused to get involved in the posturing of the others, while the drummer actually sounded fairly good at times.

Perhaps, though, it's just as well I've forgotten their name.

London Calling turned out to do a final instrument check for a bit and then disappeared for another 15 minutes, reappearing around 9:15 dressed as The Clash.

There was a definite sense of expectation in the crowd, a good mix of students and old Clash fans, like myself.

I'd ended up right in the front, but figured I may move back if things got too rowdy, but despite a bit of OAP'ing (Old Aged Pogoing) to one or two of the earlier Clash tracks, the crowd was mainly enthusiastic, but relatively calm.

Forgive the terrible audio on the video clips.

Sadly, I can't find a setlist online, but the set featured a range of tracks, from early ones like Tommy Gun, Complete Control and Jennie Jones, through Capital Radio and I Fought The Law, tracks from London Calling, like Clampdown, London Calling, Guns of Brixton, Train In Vain, Wrong 'Em Boyo and Rudie Can't Fail, Police On My Back from Sandinista (the only track from that album, I think) to Combat Rock tracks, Should I Stay and Rock The Casbah, the latter of which, with White Riot, formed the encore.

So, to the 'only questions that matters', were they any good?

Never having seen any other Clash tribute acts, I can't say how they compare, but most importantly, they certainly convey the energy and excitement of the Clash tracks live well.

I was especially impressed with the guitarist (playing the Mick Jones role) who seemed pretty accomplished to my uneducated ear, but everyone in the audience seemed to be having a good time (with the possible exception of one man a couple down from me, who never smiled once, even eliciting a comment from 'Joe' to that effect) from beginning to end and it's very much an ensemble performance. 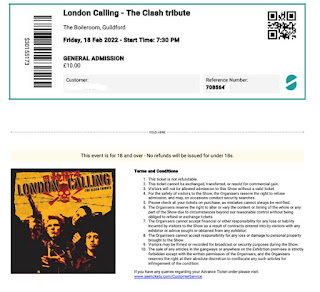 You're never going to see The Clash live again and even if you could, who knows if they'd still be any good these days, so why not go and enjoy their songs live with 'London Calling'?