Just before Christmas 2009, I bought a Panasonic Viera Plasma 37" TV.

I was very pleased with it, but said that I would have to reserve ultimate judgement as I didn't have access to HD signals.

Well, that changed a few months ago when I got Virgin Media to upgrade me to HD with a V+ box.

The V+ box is much better than the standard Virgin cable set-top unit, pretty much a match for Sky's box of tricks but with the added bonus of a third tuner that lets you watch a channel and record two others - You'd be surprised how often that happens in our household.

The Viera has proved to be a great match for the V+ service. Although it's only an 720 format TV, nothing is broadcast in anything higher and the clarity of picture in the HD form is nothing short of stunning with all the virtues that made it such a good choice initially.

If was buying today, I'd be buying exactly the same TV.
Posted by Is that all there is? at 09:15 No comments:

I'd played a couple of earlier BIA games (Road to Hill 30 and D-Day on the PSP) and enjoyed them.

Whilst Hell's Highway is essentially a WW2 FPS, you have the added feature of additional squads (Variably between levels Base of Fire, Assault and MG Teams) which you can direct to engage or suppress enemy forces.

It's not as 'up close and personal' on the whole as most FPS games although there are a few sections where you act alone to clear a building or rescue a comrade, but there are more tactics involved than games like Medal of Honour or Call of Duty. 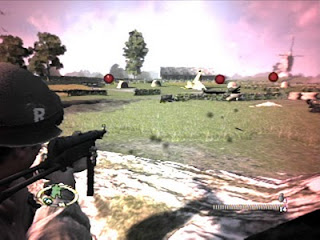 You will need to do this as one of the beauties of the game is that you just cannot run at the enemy and kill them. A few hits on you and you're dead, so another element (use of cover) is essential. You need to bob in and out of cover, hitting or suppressing enemy and directing your units to do the same, which is a refreshingly different gameplay experience to the usual WW2 FPS games.

The graphics are OK without being astonishing by the latest standards, but there are few areas that I didn't enjoy that much.

Firstly, there are agonisingly long cut-scenes featuring an ongoing story about the death of some comrades in one of the D-Day based episodes of the game. These are presumably to add a depth to the game, but after a while I found them rather tiresome personally.

Secondly, there are a number of levels where you guide a tank. These are, on normal at least, far too easy and lack the team interaction element that makes the rest of the game unusual.

To me, these sections were an unwelcome (if thankfully short) distraction, much like the aircraft sections seen in some Medal of Honour and Call of Duty games.

As with Road to Hill 30 and Earned in Blood, you fight as a member of the 101st US Airborne, this time along the road towards Arnhem, fighting through various Dutch towns in an attempt to reach the British paratroops holding the final bridge across the Rhine.

Most people with any interest in WW2 FPS will probably know how the game will end, but it does afford the opportunity feature some different landscapes (rather flat) and architecture including windmills although they're not put to particularly imaginative use in terms of gameplay.

The game starts with you in an abandoned hospital, avoiding (and engaging) Germans with one team mate (over whom you have no control) and then flashes back 4 days.

The next stage sees you searching for a glider crash site and getting to complete some fairly simple exercises with lots of guidance from the game, which acts as a training level effectively.

After that, the levels are somewhat samey, with 3 options. Engage the enemy - usually in a village or town - as a team, clear a building on your own or knock out the enemy with a tank.

The whole game is rather short. I finished it inside a week of irregular play.

Overall, the Brothers In Arms games are a refreshing alternative to the usual FPS games in terms of game play (like a more involved and flexible Rainbow Six : Vegas in the use of additional squad members), but are a bit of an acquired taste.