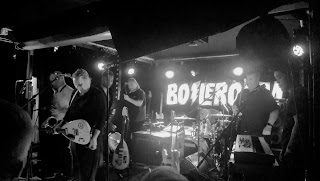 I'd seen Rankin' Roger's iteration of The Beat twice and he had been excellent both times, but I was keen to see and hear, original front man, Dave Wakeling's version.

Sadly, Roger passed away a couple of years ago, but I saw Dave Wakeling's version (often referred to as 'The English Beat', as they're known in the US as there was another 'The Beat' there, and Dave, it seems is now domiciled in the US) were playing Salisbury town hall in 2020 and bought a ticket.

Of course, we all know what happened next and that gig was eventually cancelled. Shortly afterwards, though, I saw they were playing at the tiny Boiler Room venue in near-to-me Guildford, so I quickly snapped up a ticket, only for that gig to be postponed, but eventually, two years later, I was off to the Boiler Room on a steamy Monday night to see them.

The Boiler Room is very small and always hot when crowded, as we'd had 30+C temperatures during the day and there were no tickets on sale for the gig, I knew it was going to be hot and crammed, so I arrived later than I often would, part way through the support act, the Skapones.

As the name suggests, they were a Ska band, complete with brass section, and the tracks I heard them perform were typical Ska sounding versions of other songs, Edwin Starr's War and Frankie's Two Tribes. They were pretty good, if not exceptional, from what I heard.

It didn't seem too busy for them, but when I ventured out into the garden (Something I'd never done on other visits), it was rammed and, of course, by 9PM, when Dave and his Beat arrived, they'd all coming inside.

Luckily I was near the front, off to the right of the stage, so had a good view.

Dave, unlike his former band mate Roger, has certainly piled on the pounds over the years, but many of us can say the same.

Londoner Antonee First Class took on the role of Toaster (Roger's role in the original lineup) and did a decent job, if I have to say it's a difficult task.

The only quibble I ever had with Roger's Beat was it didn't sound like the classic beat as Dave was usually the lead singer, but I would say Dave's voice has changed over the years (maybe some was down to the simple difference of recording vs live) and there were only moments where his voice was distinctive enough to echo back to the original tracks, the opening lines of "Doors of My Heart" and "Too Nice To Talk To" being notable amongst these.

That said, the crowd, even in the stiffling heat (which the venue did their best to alleviate by opening doors to distributing iced water to the audience), responded with enthusiasm to every song, often singing louder than Dave.

They opended with "Rough Rider" and then rattled through a selection of their hits.

The pace slowed a little with "Too Nice To Talk To" and "Can't Get Used To Losing You", but bounced back with "Doors Of Your Heart".

I think it was at this point that they took a short break 'to rehydrate' and many people (me included grabbed a drink from the bar).

When they returned a few minutes later, they performed 'Ranking Full Stop' and 'Mirror In The Bathroom", but disappointingly (but maybe neccessarily due to the heat) there was no encore and gradually, everyone drifted away.

I had enjoyed the evening, The Beat were always my favourite Two-Tone/Ska revival band and I can listen to their stuff anytime and it had been good to hear Dave Wakeling sing the songs I knew, but it will always be Roger's form of the band that I'll remember for the energy and excitement of the performances. 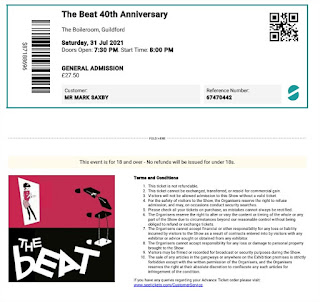 Setlist - From Colchester, but close if not identical

Rough Rider
Hands Off...She's Mine
Twist & Crawl
Click Click
Save It for Later
Whine & Grine/Stand Down Margaret (Boris)
Two Swords
Too Nice to Talk To
Can't Get Used To Losing You
Best Friend
Doors of Your Heart
Ranking Full Stop
Mirror in the Bathroom
No encore 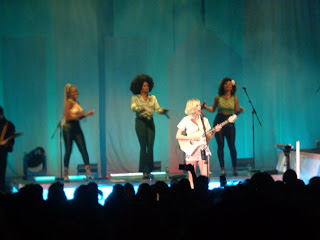 I discovered St Vincent during the 2020 COVID lockdown and when I saw she was playing in London in June 2022, I bought a ticket. but after seeing her on the BBC's Glastonbury coverage, I wondered if I was going to regret the decision.

Annie Clark (St Vincent's real name) is a divisive, imaginatinive and slightly challenging musician. She always evolves her style from album to album, never resting on her laurels and her list of collaborations speak to her constant search for something new to try musically, but the album that this tour supported, Daddy's Home, had seen her take a turn, both musically and visually, that didn't really appeal to me.

Equally, that Glastonbury performance, a few days before Hammersmith, wasn't something I found enjoyable. Her band gurned and performed '70s glam rock poses, while the sound (and maybe even the arrangements) was muddled and a little, dare I say it, indulgent.

Still, I had a ticket and maybe that Glastonbury set wasn't the right way to judge her performance.

I arrived at Hammersmith in plenty of time, but decided not to join the long queue outside, waiting until it had died down somewhat.

The support act, whose name I have completely forgotten now, was a self-proclaimed 'Black, feminist, Punk Band', formed of 4 women (I think, one, on keyboards, was permanently hidden from my sight, by the front-and-centre drummer, who seemed to be the band leader, but not singer).

The singer was on guitar and looked not unlike the Activist character from TV series 'Outlaws', while on the other side of the stage was a tall woman on Bass.

Their overall sound was OK, except that it was impossible to hear what the singer was singing or even saying, although from the Drummer's comments I imagine most of it was their self-proclamation and various complaints about Black under-representation in Punk and the Roe Vs Wade decision in the US (Both worthy of discussion, at the very least, but I didn't really come along for a political rally).

One or two tunes were OK, but I can't say I'd bother to track them down.

After the inevitable delay while the stage was re-arranged, St Vincent (and her band or is that Annie and her band, St Vincent?) appeared on stage around 9PM to the strains of the old Shep & The Limelites track "Daddy's Home".

I must admit I don't recall the exact order of tracks, so I'm relying on the setlist from Setlist.fm.

However, it was somewhat reassuring (to me) that the set started with a classic St Vincent track, Digital Witness, indicating that we weren't in for a solely 'new material' set. 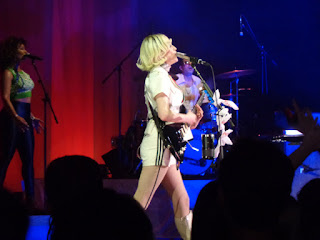 Obviously there were tracks from the new album, the second being "Down" from it, but the well known tracks, Birth in Reverse, Fast Slow Disco, New York, Cheerleader and Los Ageless were all there.

Los Ageless was especially majestic, I often feel it's too short when I play it and I wished it could have gone on for 10 minutes or more at Hammersmith.

So, did I enjoy St Vincent at Hammersmith?

The band (possibly responding to critcism of Glastonbury, or maybe just less under the influence of something?) were less histrionic and self-indulgent and the sound balance was far better in the Apollo than it had been on the TV coverage of Glastonbury.

I can't say I find St Vincent's current 'image' very appealing (She looks like a waitress from an episode of Starsky and Hutch), but no worries, it'll be different for the next album, you can rely on that, and the music will take a different direction, too.

However, that was soon forgotten as the classic songs were performed and even the new ones sounded better live.

The main set rounded out with "Fear of the Future" and the inevitable encore featured 3 lesser known tracks, rounding out with The Melting Of The Sun from the Daddy's Home album. 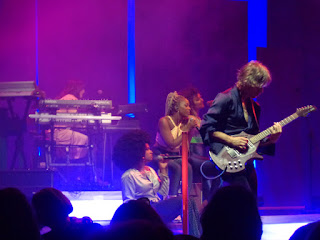 I headed back to Richmond where I'd parked on the night bus (The Tube having closed due to rail issues) happy with my evening.

Glastonbury had definitely left me wondering, but an evening with St Vincent at Hammersmith had restored my faith, she (and her band) were great entertainment and I shall look forward to the next iteration of St Vincent with interest.

Digital Witness
Down
Birth in Reverse
Daddy’s Home
Down and Out Downtown
New York
...At the Holiday Party
Los Ageless
Sugarboy
Marrow
Fast Slow Disco
Pay Your Way in Pain
Cheerleader
Year of the Tiger
Fear the Future

Encore:
Your Lips Are Red
Live in the Dream
The Melting of the Sun

EDIT : I found a bit of video from the Manchester gig on this tour on YouTube