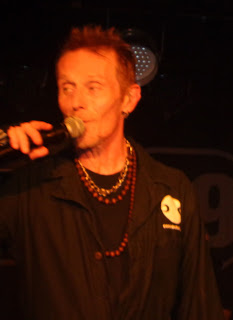 Getting to this gig proved to be an endurance event in itself.

It was moved twice due to COVID restrictions and then the second rearranged date clashed with another event I was going to and I got a refund.

However, when that event itself was cancelled, I quickly rebooked and was off to see the Stereo MCs at Sub89 in Reading on an April Wednesday evening.

It had been a while since I'd been to Sub89 and it seems parking in Reading has got ever more restricted, while the one-way system has become ever more confusing (I'm not convinced I didn't go down a Bus, Cycle and Pedestrian only road at one point, but the sign had enough conditional text to please a reader of a Jack Reacher novel and I thought it said it was only restricted until 7PM!) - Eventually I managed to stop, literally, going in circles and found the Broad Street Mall car park and arrived at Sub89 about 8:40.

Judging from the number of people and the empty floor in front of the stage, it didn't look as though there had been a support act, but it's possible I'd missed one!

I bought a beer and waited, expecting the Stereo MCs to appear a little after 9, but, to zero fanfare or flashing lights, they appeared at 9 sharp.

Initially, there was just the two singers on stage, Rob Birch and a woman. Behind the scenes I could see a couple of people working electronic equipment and the sound was clearly coming primarily from there.

The set started well, moving through Fade Away (the updated setlist says, I'd forgotten, but it was performed at some point) into Everything, Black Gold and Sketch before surprising me by including Connected early on (surely their best known song and most bands would have saved it for the finale or maybe the encore).

Sorry about the sound again, but you'll get a feeling

Being, primarily, a 90s band, I was surrounded by people about 10 years younger than me and it was quite entertaining to see the different style of dancing that that decade featured. I'm pretty sure many of those around me had been regulars at raves in their time. An attractive grey haired woman danced energetically just in front of me, while some middle-aged-spread men waved their arms in the air. 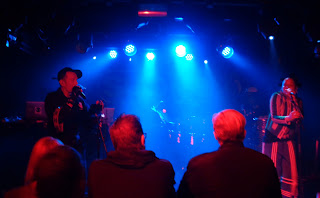 What, though, had always set the Stereo MCs apart for me, was their sound, they were distinctive, catchy, rhytmical and clever and that was all here to enjoy.

At some point, a percussionist joined the singers, I'm not sure when, which added a more organic sound to the performance.

Some other lesser known, but familiar to me and the audience, tracks followed before Step It Up, Ground Level, Running and Deep Down and Dirty rounded out the main set in fine form.

The stage was, as usual at Sub89, minimalist, but that probably focussed the audience on the performance.

As a stage act, Rob B and his fellow vocalist, weren't showy, but exuded a charisma I'd found lacking in the Bastille gig I'd attended recently.

They had a presence all the big video screens and arena venue performance lacked in that. Maybe they'd have struggled at the BIC as well, but in the intimate confines of Sub89, they had the audience from the start and never let go. 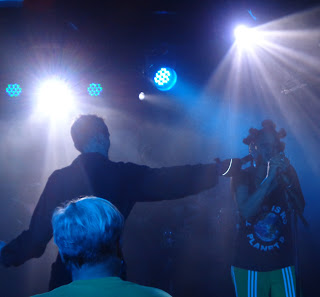 Rob's vocals are, of course, more spoken than sung, but the woman (I feel bad for not knowing her name!) had a great voice and the combination was both familiar and pleasing to the ear, with a good sound balance. The encore featured two songs I don't recall and the setlist didn't identify, although I'm sure I knew one.

They actually came back from that for a second encore where they performed a great version of Creation.

I had been looking forward to seeing the Stereo MCs live, had been disappointed to have had to cancel, but finally I was delighted to have seen them live, it was an enjoyable, involving and captivating gig - Go see them, if you get the chance!