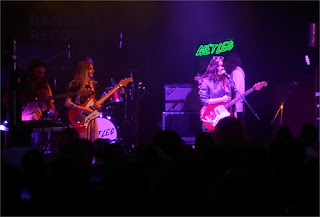 Wet Leg are a band (maybe) fronted by a tall brunette and a more dimunitive blonde (Rhian Teasdale and Hester Chambers) from that hotbed of musical creativity, the Isle Of Wight.

Both play guitar and produce a quirky, Indie sound that they described in one interview as "Party Music for Sad People".

Having watched some videos on Youtube, I found them interesting enough to see if they were playing anywhere local.

There's a lot of hype around about them, so I feared they may already be lining up big venues, rather than the small ones I prefer, when I came across an offer to buy their CD and see them live in Kingston Upon Thames (a leisurely 30 minutes out of rush hour for me).

The combined price was just £15, so I suspected I wasn't getting a full on gig, but that was fine for the money.

The album was (is, I'm writing this on the day) released on April 8th, so the (two as it turned out) live sets were the day before at Pryzm, which is a nightclub in Kingston Upon Thames.

I arrived in Kingston and parked in one of Bentalls car parks, still not really knowing how long I'd need to be there, but the car park shut at 10:30 and the ticket said that Wet Leg would be on stage at 6:30PM, so I figured 4 hours would be plenty.

When I got to the venue, there was a long queue stretching down the street, so I did the sensible thing and crossed the road and had a 50p half in the Wetherspoons!

I was just finishing my drink when I saw the doors open and the queue start to move.

Once inside we went upstairs to a medium sized room, entering on one level with stairs down to the dance floor and stage. There was another balcony level above, but I'm not sure if it was accessed from the entrance or from above. I'd guess there 300 or so people inside by the time the band came on stage at around 7:45.

The audience was mainly young, Kingston is a University town, but I wasn't the only one with grey hair in the audience and there was a tiny lad with his mum and grandparents in some seats (most were standing), probably not yet 10.

The band came on from the side, their equipment setup for the set.

In the end, they played for about 45 minutes, more than I expected actually.

I have to say, from where I stood on the entrance level, the sound wasn't great, with the singer's vocals (The brunette leads mostly) often hard to distinguish over the instruments, but it was possible to distinguish the songs I knew from those I didn't and the overall feeling of a strong, powerful sound was definitely enjoyable.

The vocal delivery is not particularly melodic, more a spoken one, at one point I was reminded of the Flying Lizard's "Money" performance from long ago, although the band are more energetic than that.

As most people there had purchased a combined CD/Ticket, I think it's fair to say most weren't there to be critical, but as the performance went on, the band seemed to grow in confidence and the audience warmed up.

Songs like "Ur Mum", "Wet Dream", "Oh No" and the finale, "Chaise Longue" were obviously recognised by more people and received the best reception, but generally the band were entertaining and enjoyable.

Apparently there was another set with doors opening at 8:30, so it was relatively short but it had been an enjoyable set and very good value! Perhaps more bands should do 45 minute sets for more affordable prices?

Wet Leg are rather the band of the moment and, if I'm honest, I'm not sure they're not a little faddish, but I enjoyed the gig and am eagerly awaiting the postman with my copy of their CD!

If I'm proved wrong and they've got a long career ahead of them, I certainly won't be unhappy!

Edited to Add : The CD arrived and I have say there are some excellent, varied tracks (listening to 'Loving You' right now, very different and great vocals, so Rhian can really sing! Check out this video for even more proof) on there, so maybe (hopefully) there's a long term future for Wet Leg!

Setlist:
Being in Love
Wet Dream
Supermarket
Too Late Now
Obvious
Oh No
Ur Mum
It's Not Fun
Angelica
Chaise Longue
I got this from Setlist.fm, but I recall 'Wet Dream' being later in the set. Tracklist seems about right, though